Know the will, and make the bill

Will there be a citizens register or won’t there be? Amit Shah said in Parliament that there will be; Narendra Modi said on Sunday that he hasn’t thought of one. Looks like the protests have given the government second thoughts.

No issue. This is the way things should be. When rulers feel that people don’t like a law, they should not enforce it.

People ought to be ruled by people’s laws, not by the king’s laws—that is the sacred doctrine of law-making enshrined in the mandate of the Magna Carta. That was also the doctrine that the illustrious Iltutmish, the slave-turned first sultan of Delhi, conveyed to a fanatical ulema when he rejected its demand to impose Islamic laws on the Hindus. Yes, the seeds of the secular state were sown 800 years ago by a sultan in this sacred land of the Vedas and the Upanishads that professed the cosmic worldview, Vasudhaiva Kutumbakam.

How do rulers and lawmakers get to know what laws their people want? Indeed, a large and diverse country like India cannot hold Swiss-style referendums on every law. Referendums can also be sure shots for secession, or prescriptions for balkanisation, as the British learnt the Brexit way. As Benjamin Disraeli said a century and a half ago, “what we call public opinion is generally public sentiment”. 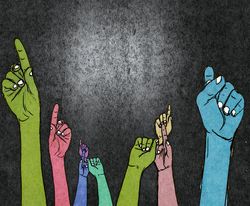 What then is public opinion or public will? Political pundits preceding Disraeli had thought of it. Jean-Jacques Rousseau had said there was something called ‘general will’ which was not necessarily the majority will. When the majority will is imposed on society or on its minorities, it is not democracy but tyranny of the majority, said J.S. Mill.

How does one get to know the general will, if it is not the majority will? In a liberal democracy, the general will is evolved in the form of a consensus obtained through informed debates and discussions. That is where Modi and Co erred. They did not get the citizenship bill or the NRC idea discussed or debated. Ideally, bills are put in the public domain weeks ahead for public debates from which law-drafters can draw informed opinion. Once a bill is introduced in the legislature, the wise men there should get time to discuss it, debate it or damn it. They may even send it to a committee where members shed their party loyalties, bare their true minds, exercise their brains, consult outside experts, give their objective opinions, and help refine the bill.

None of these procedures was followed while amending the Citizenship Act. The government used its majority to reject the opposition demands for scrutiny by a committee, and got the bill passed in a few hours. That was the fate of most bills passed in the last session. In 20 sittings spread over 26 days, the Lok Sabha passed 14 bills, the Rajya Sabha 15 and both houses 15. Fast work, but how much of legislative mind was applied?

One man who is worried is Rajya Sabha Chairman Venkaiah Naidu. Can we institutionalise a system of legislative impact assessment? he has asked. They have in Britain, Finland and European Parliament, by which every major law is studied by law-drafters, lawmakers and others before it is introduced. Any takers?

Tailpiece: Citizenship registers have always caused problems. Remember how one such register was forced by Augustus Caesar upon the Jewish minority who inhabited Judea. That exercise witnessed the birth of a messiah who gave up his life on the cross, but whose legacy changed Judea and Rome.

Merry Christmas, dear readers! And a Happy New Year, as reckoned from the year of his birth.