British press baron Alfred Harmsworth famously said, “When I want a peerage I shall buy one like an honest man.” In 1905, he did get a peerage and thus a seat in the House of Lords as Lord Northcliffe, but we do not know if it was purchased.

Seats in the Indian Parliament cannot be purchased with money, but it helps if you have lots of it. How else did Vijay Mallya get in? Leave it. We should be asking, how did he get out?

Corporates donate funds to parties and candidates who would serve their interests. Payments have been made in various ways and hues—cash and cheque, white and black, clean and dirty, over the counter and under the table, electronic transfer and manual hawala, secured in suitcases and tied in red tape. And now, the electoral bond. 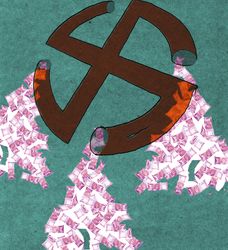 Use or abuse of money power had always been the bane of Indian politics. Rich traders made and unmade kings and kingdoms in mediaeval India. Banker Jagat Seth bankrolled the Battle of Plassey. For the next one century, we were ruled by or in the name of a company. The freedom movement was bankrolled by native corporates. Post-independence, corporates funded parties that served their interests. When she found more cheques being issued in favour of the rightist Swatantra, Jan Sangh and Congress (O), Indira Gandhi banned corporate funding to parties. Funding went underground, or under the table.

The licence-permit raj thrived on the strength of suitcase gratification. Campaign cash began to be carried in huge chests in chartered jets and express trains. The lefties, too, did not lag behind. Trade union barons collected cash for them from workers, petty contractors, brokers, merchants and even factory-owners.

Rajiv Gandhi lifted the ban on corporate donation to parties in 1985, but the cash chest culture continued. Several venerable political figures were ‘caught’ with suitcases of currency, the most infamous being the claim by big bull Harshad Mehta that he had carried crisp currency worth ₹1 crore in a suitcase into Prime Minister Narasimha Rao’s home.

As corporate profits soared in liberalised India, poll costs, too, soared. Then came the hawala scam which singed several reputations. As a few leaders declared they would take money only in cheques, corporates like the Tatas floated electoral trusts. The Manmohan Singh regime gave legal sanctity to this in 2013 by amending the Companies Act so as to allow corporates to donate up to 7.5 per cent of the average of their previous three years’ profit.

Campaign costs soared in the Modi era of laser dazzle and data analytics. Finally, Arun Jaitley’s 2017 budget unveiled a scheme by which anyone could buy a bond from State Bank during specific 10-day windows before elections, and donate it to any party. Having come through the bank, the money would be white, but companies do not have to tell who they are donating to, and parties do not have to reveal who had given them the bond.

The Modi government went ahead with the scheme overruling the objections of Election Commission and the Reserve Bank. As it was implemented, the 10-day window rule was waived, as also the rule that only profitable companies could buy the bonds. Shell companies, foreign firms and even those with dubious links are said to have bought the bonds and donated them to the ruling party. With neither the public nor the auditors coming to know of who donated how much to whom, the scheme has turned out to be as opaque as the old treasure chests and suitcases.