No ghosts at the breakfast table

India will not join the Regional Comprehensive Economic Partnership (RCEP) because neither Mahatma Gandhi’s talisman nor Narendra Modi’s conscience would permit the latter to sign it. Bless both. If only Modi had applied the same tests before the note-ban three winters ago!

Gandhi’s talisman, if you do not know, was a simple one. “Whenever you are in doubt (rarely with Modi), or when the self becomes too much with you (often with Modi), apply the following test. Recall the face of the poorest and the weakest man whom you may have seen, and ask yourself if the step you contemplate is going to be of any use to him.”

We do not know which poor wretch’s face Modi recalled in Bangkok. It would have been tough, particularly in the company of suited-booted diplomats who had been haggling with the ten ASEAN tigers and cubs and five Pacific sharks. All the same, Modi did it, and that calls for a few rounds of applause.

Proffered as the mother of all free-trade deals, with low or no tariff walls among the ten ASEANS and the rich Pacific five, the RCEP made great geopolitical and geoeconomic sense. A few partners are rich in resources, some in human skills, most in knowhow, and all in enterprise. Had India joined, it would have been the world’s largest trading block, consisting of half of the world’s population and a third of the world’s riches.

Well, that sounds much like what Lord Amherst, that forgotten governor-general of India, claimed two centuries ago. That “the emperor of China and I govern half of the human race and yet we find time for breakfast”.

The fact is, Modi would not have found time for breakfast if he had signed the RCEP. Chinese gadgets, New Zealand cheese and southeast Asian auto parts would have flooded the Indian market, sending tens of thousands of small businessmen into bankruptcy and many more farmers and cowherds to suicide. Not the faces of the poorest, but the ghosts of the poorest would have haunted the breakfast tables of Delhi’s rulers, much like Banquo’s ghost at Macbeth’s banquet. 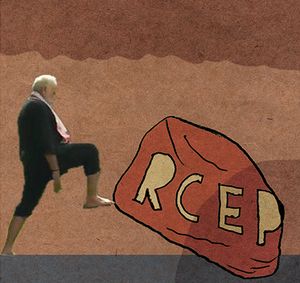 Many may wonder, why then did we engage in talks for full seven years if we knew it was gonna be a bad deal? The Congress and the BJP are having a free trade of charges over that. We have been telling Modi not to go for the deal, says the Congress. It was the Congress-led regime that started the talks, counters the BJP.

Both are right and wrong. There is no harm in engaging in talks and trying your best to snatch a fair bargain out of a bad deal. It was right on the part of Manmohan Singh to have explored the deal; it is also right on Modi’s part to have backed out when he found it was going to be a China-heavy gang-up.

Now what? Having found that we have little economic heft, our eastern neighbours will be lukewarm towards our Look East and Act East initiatives. Our diplomats will have to find newer ways of engaging them politically and strategically.

On his return, he called on Napoleon, then living in British-forced exile in St Helena. There, Napoleon gave him a line which is still quoted by strategic pundits: “Let China sleep; when she wakes she will shake the world.”