A tale with a stink

Winston Churchill once compared Neville Chamberlain to a “town councillor who looks at national affairs through the wrong end of a municipal drainpipe.” The quote has been attributed to several other British prime ministers and their critics including Lloyd George, Anthony Eden and Harold Wilson.

Today, PMs ought to do just that—be like a town councillor and look into municipal drainpipes, from the right end and the wrong end. Narendra Modi’s PMO is doing just that, and rightly so.

Didn’t get it? Wait. There is a stink in this tale. 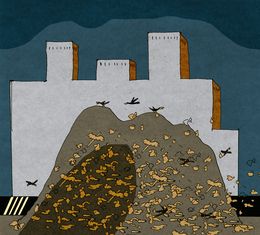 Modi’s Swachh Bharat will be five years old this October 2. In the last five years, mountains of muck have been removed, covered or brushed under the carpet in India that is Swachh Bharat. Ten lakh village homes and six lakh town houses are said to have got their first toilets; five lakh common latrines have been built in slums and shanties. The folk in six lakh villages claim to have none amid them who walks into the great outdoors with a mug in the morning, so claim 4,000-odd towns and cities. Three out of five villages have some means of removing waste, and 76,000 town wards have 100 per cent door-to-door collection of waste bags.

But where does all the muck go? Therein lies a sordid tale, a tale with a stink. Yes, we are getting our homes, hamlets and towns cleaner, but neither Mother Earth nor Mother India is actually getting any cleaner. We are not even sweeping the dirt under the carpet, but moving it from our homes to our neighbour’s backyards.

Look at Delhi. The capital city is getting scrubbed and cleaned better these days than it was five years ago, but more waste is now getting dumped in the Ghazipur landfill in the city’s backyard, a stone’s throw from the Uttar Pradesh border. So much so that the dump has grown into a mound almost as tall as the Qutab, Delhi’s iconic monument, and is growing far faster than Everest to become the tallest monument in Delhi.

Think of it, good people of Delhi! This monument of stink will still be there, centuries after the forts, towers, palaces, citadels and condominiums built by the Tomars and the Tughlaqs, the Mamluks and the Mughals, the Lodis and Lutyens, and the DDA and DLF have gone to dust like the city built by Ozymandias. This vast heap of waste would outlast everything that man has built. Even after “the whole world turn[s] to coal,” this toxic dump would “chiefly live”, as George Herbert wrote about virtue.

Yes, the evil that men do lives long after them—so would plastic, paper, PET and polythene. A plastic shopping bag we throw away may take 20 to 50 years to rot, a plastic cup 50, an aluminium can 200, a glass bottle 500, and a plastic bottle 700.

Now the PMO has asked the government’s principal scientific adviser K. VijayRaghavan to get to the root of the stinking problem, and find out how the existing muck can be removed and recycled, and how the everyday waste can be treated. The ambitious idea is to achieve zero landfill. There will be an 18-month pilot project, and then land and funds will be allotted to the selected companies for testing their tech solutions. They could do anything with the rot—biomine (using microbes to extract metals), build roads, generate gas or power. Just make clean wealth from waste.

That’s quite a clean sweep. Cheers!