Punch in a shrunken pack

When it came to campus selection, Narendra Modi was most fair. He picked up two of his top four cabinet hands from Jawaharlal Nehru University, the campus that has been reviled by many of his party colleagues as a breeding ground of dissenters, seditionists, traitors, anarchists and communists.

By Kannagi and Tiruvalluvar! Both the JNU ‘selectees’, Nirmala Sitharaman and S. Jaishankar, are of Tamil origin. Tamil Nadu didn’t give the BJP a single seat, yet Modi picked two Tamil-speakers for his cabinet. Bravo, prime minister, that’s being fair, twice over! 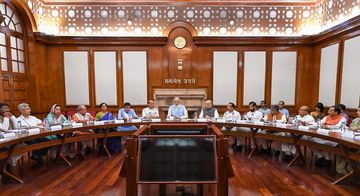 The fairness has already paid dividends. The first controversy that the government got into was over the proposed new education policy that would have given primacy to Hindi, a language that many in the north wrongly claim to be the national language of India. (It is not; it is only the official language of the Union, a status it enjoys along with English for all purposes.) As Tamil Nadu politicians and public breathed fire and brimstone, the two ministers tweeted truce terms in Tamil. That doused the fire.

Ministries are myriad in the Union council, and all the cabinet ministers are considered equal. But as in George Orwell’s Animal Farm, some are considered more equal—the ministers of home, finance, foreign affairs and defence, who have their offices on Raisina Hill. Along with the prime minister, who is the first among equals, this foursome form the cabinet committee on security. Two of the four in this cabinet are Tamil, and are JNU alumni.

Modi has not only tried to be fair, but has also given more political ballast to the council. If he had packed his old team with 19 members from the Rajya Sabha and given 12 of them cabinet rank, this time the entire ministry has only 11 upper housies of whom six—Nirmala, Piyush Goyal, Prakash Javadekar, Dharmendra Pradhan, Mukhtar Abbas Naqvi and Thaawarchand Gehlot—are in the cabinet. Jaishankar, and Ram Vilas Paswan, who has served in the cabinets of six prime ministers, may join them in the upper house. After eight wins, some of them with record margins, and two defeats from his Hajipur, Paswan has ended his long Lok Sabha run.

Modi has also put more of his cabinet colleagues through the electoral wringer. Ravi Shankar Prasad and Smriti Irani, who were upper housies, have come into the Lok Sabha this time.

Modi talked of minimum government and maximum governance last time, but ended up with a jumbo council of 75 ministers, 27 of them in the cabinet. This time, he has shrunken the kids to just 57, two dozen of them in the cabinet. Arun Jaitley and Sushma Swaraj were kept out for not being well; Uma Bharti and Radha Mohan Singh for not having done well; Suresh Prabhu, Maneka Gandhi and others, who are well and did well, for reasons known to Modi alone. A bird from Deendayal Upadhyaya Marg says J.P. Nadda and Rajyavardhan Rathore may get top party jobs—one in Delhi and the other in Jaipur.

The PMO, too, has been given more ballast. The national security adviser has been invested with a cabinet rank, for the first time after Vajpayee’s man Brajesh Mishra left. But Ajit Doval is still one feather minus. Brajesh had also held the post of principal secretary.

Tailpiece: All eyes now are on two men in the PMO. Principal Secretary Nripendra Misra is 74, and if Modi applies the age cut-off of 75 years to the bureaucracy, too, he may be succeeded by Additional Principal Secretary Pramod Kumar Mishra next year.