Rahul Gandhi is miffed that Narendra Modi called his father, the dear departed Rajiv, Corrupt No. 1. “Your father’s courtiers called him ‘Mr Clean’, but his life ended as Bhrashtachari No. 1,” Modi said.

Tauba-tauba! Shantam paapam, cried Congress leaders. The Mahabharat says those who speak ill of the dead are demons—so posted a secular swami (not an oxymoron) on his Facebook page. Neither did he cite the quote, nor did he recite the sloka. 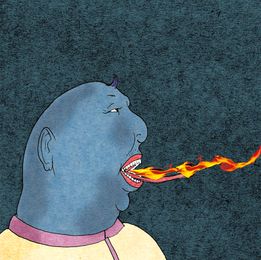 The problem with quotes from epics, classics and fables is that there is little that is sacred in them. In one story they tell you one thing, in the next story they tell you something to the contrary. Look at the Panchatantra. If the first tantra is about mitrabheda or breaking friendship, the next one is about mitrasamprapti which is making friends. The stories are supposed to teach you morals, but they are all about adulterers, seductresses, prostitutes, enchanters and cheating spouses.

About quotes, the less said the better. Classics, fables, and philosophers of yore will give you any quote to suit any occasion. Take the adage “do not speak ill of the dead”. The line has been traced to philosopher Chilon of Sparta who lived around 600 BCE, and was quoted by the third century CE biographer Diogenes Laërtius. (Not to be confused with that cynic thinker Diogenes who many in Athens thought of as the looney with the lantern.)

The Chilon line, originally in Greek, has since been condensed and latinised as de mortuis nil nisi bonum. But the world of Latin, more familiar to the Congress than to the BJP, offers a counter-quote which Modi can cite: “The evil that men do lives after them; the good is oft interred with their bones.” So be it with Rajiv, as it was with Caesar.

Classical quotes are the least of the BJP leaders’ worries. They say, they speak ill of the dead because they are fed up with the vice of sujana-apavaad (maligning of the virtuous) that Rahul has been indulging in. He has been calling Modi a chor day in and day out, and even committing contempt of court. Compared to that, Modi’s statement sounds like a line from the psalms.

The fact is that both sides have been sinning—sinning woefully to damnation and defamation.

All the same, no need to say tut-tut. Old-timers would tell you that standards of electoral rhetoric have fallen. Banana oil! Electoral rhetoric has always been nasty. Acid tongue has been an asset to politicians ever since man became a political animal.

Then, why are we agitated over Modi’s and Rahul’s diatribe? Because of two reasons.

Hold your tongues, gentlemen. The world is listening, and judging you—not by your deeds alone, but by your words, too.

Tailpiece: In an election rally in Gandhinagar in 1991, L.K. Advani unleashed a diatribe against the Congress chief minister Chimanbhai Patel “whom you call by another name”.

The crowd responded with a thunderous “Chiman-chor”.