His followers may not like me saying so, but Narendra Modi has been drawing much from Christian scriptures and mythology of late. At Allahabad that is now Prayagraj, he did a messianic act. He had a holy dip in the Ganga, and then went on to wash and wipe the feet of six Kumbh Mela cleaners. That looked much like Jesus Christ washing the feet of his 12 disciples at the Passover feast. God bless!

Critics in the Congress say, Modi was shooting for Discovery Channel at Jim Corbett Park even after being told that terrorists had struck at Pulwama killing a busload of CRPF troopers. In their view, the prime ministership of India has fallen in scholarly standards—from Nehru’s Discovery of India to Modi’s Discovery documentary. 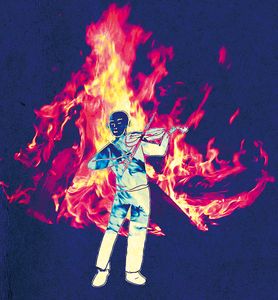 So what? Come to think of it, Modi staying on to shoot at Corbett was verily what Ignatius of Loyola would have done. Loyola is said to have been asked while playing a game of football, as to what he would do if he were told that the world would end in an hour. While his playmates, probably all seminarians, said they would rush to the chapel and pray, the would-be saint said he would finish his game. The story is being told about several others, too, and is often cited as an illustration of single-minded dedication to the task at hand, however minor or trivial it may appear.

Gandhi was much like that. On the eve of a crucial meeting that was to decide on the course of the freedom movement, he is said to have been perturbed over the loss of a piece of pencil gifted to him by a child a few days earlier.

Loyola and Gandhi are saintly personages. Saints preach, but it is lesser mortals, some of them scoundrels, who practise. What Loyola preached, Sir Francis Drake practised. Drake continued with his game of bowls at Plymouth Hoe, even after a ship captain rushed in with the news of having sighted the mighty Spanish Armada sailing up the English Channel to invade England. The great admiral, originally a pirate, went on with his game, finished it, and then called out his ships and mates to battle stations. In the end he destroyed the Armada. Cool dude!

Now Modi has done much the same. He went ahead with his tasks at hand, quietly called his aides upon reaching Delhi, and has now delivered a strike at Balakot.

Crises call for cool heads; not bleeding hearts or panicking minds. A good leader is one who is dedicated to his purpose and delegates his powers, so that things would work even if he is not there. Robert Clive is said to have gone to sleep in the afternoon, after positioning his guns and men at Plassey. When the enemy charged, his second-in-command, Eyre Coote, did not have to wake him up. Everything went off, including the English guns, as Clive had intended and ordered.

Problems arise if leaders fail to delegate. George Anson, who was commander-in-chief of India in 1857, was shooting partridges in Shimla when sepoys mutinied in Meerut. As things unfolded, it became clear that he had not delegated authority. The British paid a heavy price for that neglect.

A leader can be anywhere when a crisis hits. But he should have his crisis managers in place to tackle the situation, even if he is not there. When intruders were spotted in Kargil, Army chief V.P. Malik was in Poland on an official visit, and corps commander Kishen Pal in Delhi at the bedside of his wife who had undergone a surgery. But the system moved on its own without much of a hitch or a glitch, till the two leaders arrived on the scene and took charge.

Systems in place are more important than leaders in place. Now Modi, too, has proven the adage.