The prime minister would verily be the most gifted personality in our land. Topping the list would be his gift of the gab.

Then there are the gifts that he receives every day—from foreign dignitaries when he visits them or they visit him, and from lesser worthies within India. Mostly things of little use, except on the mantelpiece or in the showcase—enamelled tea-sets, embroidered shawls, encrusted watches, engraved bracelets, encased replicas, enlarged insignia, reprints of old books and records, paintings, carpets, wall-hangings, coasters, tea-cosies, salvers, salwars, turbans, jackets, cravats, cuff-links, tie-pins, lapel-pins, perfumes, plaques, mementos, monogrammed towels and such other bric-à-brac.

But there could also be a few gems thrown in between. Like the embroidered suit that gained much infamy after Narendra Modi wore it to tea with Barack Obama. That earned him a Malvolio-like image, and his government the sobriquet “suit-boot ki sarkar” from Rahul Gandhi. The suit, said to have cost a few crores to the donor, proved costlier for Modi. Many in the BJP believe that it cost him the 2015 Delhi Assembly polls that took place a few days later. 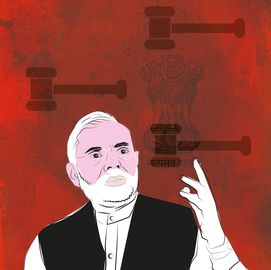 Some gifts are of emotional value. Like his old school attendance sheet that Manmohan Singh received from Pervez Musharraf. It stumped not only poor Manmohan but even the protocol vultures in the foreign office. They just did not know what to gift the general in return. They had already given him a copy of the old photo of the Neherwali Haveli in Old Delhi where Musharraf had spent his childhood.

Some gifts cannot be brought home. Kanthakha, the wiry Mongol horse that Modi received on a visit to Ulan Bator, had to be left behind because India had banned exchange of zoo animals as gifts since 2005.

The rule is that our dignitaries—prime ministers, ministers and officers—can keep only inexpensive gifts with them after they leave office. Anything costlier than Rs5,000 has to be deposited in the toshakhana. If a dignitary takes a fancy for an item, he can pay the market price and keep it. Manmohan thus took five tea-sets.

The rest of the stuff are kept or auctioned by the toshakhana, or given over to museums. Former president Pratibha Patil packed them off to a museum that she had built in her hometown. A few of the gifts that Nehru received are on show at the Teen Murti Museum. If Modi has his way, the serene museum complex could soon turn into a dumping ground of prime ministerial bric-à-brac. He is converting the place into a museum for all prime ministers.

Most of our prime ministers have been handing over the costlier stuff to the toshakhana and leaving quietly. Not Modi, the ace merchandiser. He is putting the stuff to better use. Three weeks ago he put up for auction, in the National Gallery of Modern Art, New Delhi, some 1,800 such gifts that he had received in the last less than five years (that works out to five gifts or more received every day), and pledged the proceeds for cleaning the Ganga. Bless the thought.

TAILPIECE: When they met in Harare on the independence of Zimbabwe, Pakistan president Zia-ul-Haq gifted Indira Gandhi with a coffee-table book on Pakistan. Later she found that it carried maps which showed the whole of Kashmir as Pakistan’s. She asked Natwar Singh, who was posted in Harare, to quietly return the book to the Pak foreign office.