But for the occasional, accidental one, we do not get too many revealing books by insiders of high offices. Perhaps because our insiders are mostly career officers, used to a lifetime of discretion. Perhaps most of them do not plan to go anywhere but hope to continue in another avatar. Or perhaps the publishing advances are not tempting enough to risk the ire of former bosses.

But in that treacherous swamp within the Washington Beltway, which Donald Trump wanted to drain before he became its prize exhibit, tell-all books are a way of life. People, it seems, join high office only so that they can get a book out of it; they are already telling even before they have stopped kissing. The Room Where It Happened, the recent book by Trump’s third NSA John Bolton, is a case in point. It hangs out all the dirty linen of the White House and confirms, if confirmation were still needed, the chaos that passes for decision-making. Trump’s response: Bolton is a liar, a washed-up creepster, lowlife, wacko and above all, a sick puppy. Meanwhile, Bolton is richer by $2 million in advance royalties, though an incomplete pre-approval process could still cause problems.

A reader may well wonder: why did Bolton paddle so hard to get the NSA job when he knew the pitfalls. After all, Trump had broken free of the “axis of adults”—James Mattis, Rex Tillerson, John Kelly; even the trusted duo of Steve Bannon and Reince Priebus were out. The President was in moody swing mode, petulantly tweeting in every direction at odd hours; it was clear that his third NSA would have about as much job security as a wife of Henry VIII. 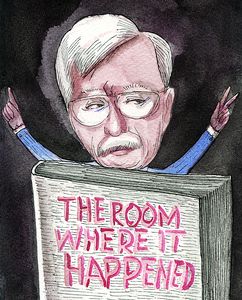 Possibly because in Washington DC, which despite its imperial architecture and allusions of Rome is actually quite a small town, these jobs are a big thing. The bubble of policy makers—administration officials, policy wonks, Congressmen—is limited and incestuous. A well-oiled revolving door separates those in government and those without; the latter bide their time in Massachusetts Avenue think-tanks, universities, corporate boardrooms and lobbying firms. When the door revolves with an administration turnover, there is a fierce scramble for government positions which offer power, presidential proximity, a CV upgrade and material for a lucrative book.

When Trump surprised everyone, including himself, by coming out of the left field in November 2016, Bolton, as he modestly puts it, “offered his services to be secretary of state”. Actually, he lobbied hard, attracting Trump’s attention through tough talk on Fox News and enlisting support of conservative funders. The job went to Tillerson; Bolton’s Senate confirmation posed a problem as did Trump’s dislike of Bolton’s moustache, the envy of any self-respecting walrus.

But Bolton hung around the Oval office, looking for the NSA job which would not need a Senate confirmation, and got it on H.R. McMaster’s departure. A “hardline interventionist with a palpable desire for war,” Bolton favours military options on Iran and North Korea, and espouses a generally tough line. He famously said that it would be no great loss if the UN building lost ten stories. In his 17 months—not bad in Trumpland—he ticked off some pet boxes, helping pull the US out of the Iran nuclear accord, the INF Treaty and the Human Rights Council until inevitable clashes with Trump led to his resignation. Trump maintains he fired Bolton. In any case, the president will be aghast that Americans paid the $2 million for this trashing of his presidency, targeted to abort his second term, while the rest of the world got it free on WhatsApp.