Green has long been part of the strategic lexicon. Green politics, green banking, green insurance, green architecture, green audit, green warriors, green shipping and, when you are just pretending, there is greenwashing. Blue, on the other hand, belonged more to the whimsical world of the spirit. For instance, I see you once in a blue moon. Or, long ago, I chased the blues in little musical bars across the Mississippi delta. Then, along came a book titled Blue Highways by an improbably named author, William Least Heat-Moon, in which the narrator drives through the United States—not on inter-state highways, but on backroads marked in blue on the old maps—and discovers small towns and chance companions. More recently, a slim translation of starkly narrated Hindi short stories by Vinod Kumar Shukla came to hand, cryptically titled Blue is Like Blue. When you think of it, there is no better way of describing blue than calling it blue.

But blue is creeping into the world of politics. There was always the 18th century Blue Stockings Society, a network of educated and socially committed women; the blue stocking tag long outlived the society. There was also the Blue Water Navy, as if any water large enough to carry a navy could be anything but blue. But redundancy never deterred strategic experts. 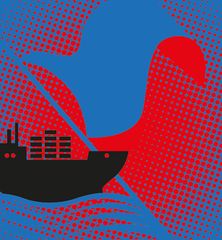 Lately, the blue economy made its entry, bearing a special significance for countries with extensive exclusive economic zones (EEZs). The EEZ itself is a deceptive concept. France, thanks to its island territories, has a larger EEZ than the US or Russia; and Kiribati outranks India, despite our long coastline. The blue economy has borrowed shades of green and entails the sustainable use of ocean resources for economic growth. It covers not just traditional ocean activities such as fisheries and maritime transport, but stretches also to renewable energy, aquaculture, seabed extraction and marine biotechnology. But harvesting the global oceans worth $24 trillion in a sustainable manner costs money. Hence the Blue Finance Initiative covers multi-disciplinary research, infrastructure solutions and innovative financial instruments to appropriately address challenges faced by the oceans.

President Donald Trump’s visit brought us nearer to the Blue Dot Network (BDN). This multi-stakeholder project is intended by its sponsors—US, Australia and Japan—to counter China’s Border and Road Initiative and provide a more trustworthy, sustainable and transparent route to high-quality infrastructure projects; China’s Global Times terms this aspiration “delusional”. Under the BDN, once a project gets a blue dot, it is green-lighted for private capital as a kosher investment. About $60 billion of private money, put together by the US International Development Finance Corporation, which will now have an office in India, is waiting in the wings.

But as the US presidential election draws close, Trump may wonder if this network could have been more fortunately named. Democrat supporters in committed Republican states are often termed Blue Dots in a red state. Bumper stickers, T-shirts, coffee mugs and other merchandise are emblazoned with that declaration. But that is not all. These blue dots can be individuals holding on to their democratic, liberal beliefs, even secretly, or podcasters tentatively putting out a counter view. Or entire university towns such as Lawrence or Austin, where rainbow flags, Black Lives Matter placards and hipster beards bravely proclaim liberal intent. Against a conservative sea of red, the blue here appears closer to green.