The formality of informality

The strategic gains of the recent Narendra Modi-Xi Jinping informal summit may take time to roll out, but the optics got high marks. The shots of the two leaders exchanging archaeological titbits against Arjuna’s Penance, enjoying a dinner that went on beyond schedule, or looking out pensively to the sea convey an impression of mutual understanding and casual cordiality.

But this casualness does not come easy. It is highly calibrated and closely choreographed, and any harried chief of protocol will tell you that informal summits need much more work than standard ones. 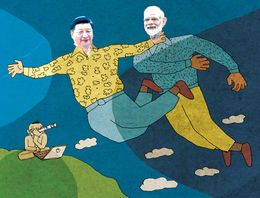 To begin with, the venue must have the potential to fully engage the leaders and ignite their personal chemistry. Opting to move away from the capital comes at a price. Standard protocol drills are no longer available and new ones have to be created to provide structured informality and create a unique atmosphere. Besides proper infrastructure, the venue should have a distinct cultural or historical character that justifies its choice and adds colour to press copy.

Every detail, from security implications to camera angles, is meticulously planned. Backroom boys examine the history and politics of the setting for any potential embarrassments and dig up factoids to suitably pepper the talking points—all the more important since the leader will be on his own and officers cannot hand him hastily-scribbled notes.

There is no better indicator of the calculated casualness of informal meetings than the dress adopted. Not only is the straitjacket imposed by officials thrown off, the sartorial jacket, too, is discarded. In Mamallapuram, the prime minister’s donning of the veshti, white shirt and angavastram was not only a nod to Tamil culture but a deliberate shift from the formality of a bandgala. Xi, too, discarded tie and jacket for some time. The Wuhan pictures show him with both, so the Chennai Connect may have stolen a march on the personal chemistry scale.

Sartorial signalling is nothing new. Franklin D. Roosevelt wore a round-necked sweater while fishing at Shangri-La (later Camp David) with Winston Churchill in an overcoat, holding a cigar. Jimmy Carter donned a grey cardigan and blue jeans to open up Anwar Sadat, who preferred a brown smoking jacket and pipe. Bill Clinton wore a casual blue shirt to find a solution to the Middle East, but the difference between Ehud Barak’s solid black shirt and Yasser Arafat’s military fatigues was too stark.

Multilateral events usually have an evening or retreat when the dress code turns interesting; a “family photo” records evidence for posterity. Clinton gifted leather bomber jackets to other Asia-Pacific Economic Cooperation leaders in 1993 and began what is now known as the “silly shirt” tradition. APEC leaders have since posed in Peruvian ponchos, Korean durumagi silk robes and Mexican guayabera shirts. The G7, too, tend to shed the black suits or neutral dresses in favour of more cheerful options. Justin Trudeau’s brown shoes, patterned socks and shiny blue suit stood out in the 2018 group photo, as did Theresa May’s leopard-print heels.

The ASEAN and Asian summits are leaders in jazzy dressing. From embroidered barongs in the Philippines to batik shirts in Bali to colourful silk shirts in Cambodia, you get the idea; the Japanese wisely thought the kimono might be a bit of a stretch. At our own 2015 India-Africa Forum Summit; 54 leaders wore colourful kurta, bandi and safa to the dinner hosted by the prime minister at Pragati Maidan. Some leaders carry these off with élan; others radiate awkwardness though measurements are usually taken in advance to increase comfort levels.

Going informal can be hard work, but clearly, building better ties is easier without ties.