Just when you think things could not get more bizarre, they suddenly do.

Recently, US President Donald Trump talked of purchasing Greenland, the world’s largest island. Fair enough: he has, after all, purchased expensive parts of the world’s most famous island, Manhattan. “Absurd,” dismissed the prime minister of Denmark, of which Greenland is a semi-autonomous constituent territory. “Nasty!” responded Trump, cancelling his Denmark visit.

This could have ended there, a choice morsel in the 24x7 tweet-fest from Washington. But there is more here than the covetous glance of a real estate mogul at a generous swathe of beautiful, virgin territory. Earlier attempts by the US to buy Greenland—in 1946 and in 1867, the year of the Alaska purchase from the still smarting Russians—as well as fresh plans to open a consulate in Nuuk, Greenland’s capital, confirm an abiding strategic intent. 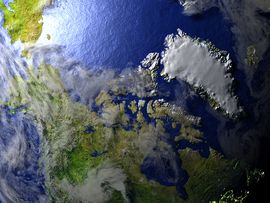 An Illustration of the arctic region

Greenland abuts into the Arctic, a region balanced in relative equilibrium between the Arctic nations—Canada, Denmark, Finland, Iceland, Norway, Sweden, Russia and the US. But global warming has brought its riches, till now frozen in primordial ice, within reach of greedy human hands. As the region warms at twice the global average, it is open season on valuable minerals, rare earths, 6 per cent of the world’s known oil resources and 25 per cent of gas reserves. The possibilities of pelf and profit are proliferating.

As are the rivalries. Russia, with its 24,000km Arctic coastline, is a Polar Great Power, building massive power plants, ports, military facilities and adding to its ice-breaker fleet. China is investing heavily in Arctic nations for energy and resources, its eyes set on the Northern Sea Route (NSR) that could cut down container travel time between Europe and China by several days. The Chinese refer to it as the Polar Silk Route and to themselves as a “near Arctic nation”. With ice-free summers in the Arctic estimated to be 20-40 years away, the NSR may soon be a viable reality. The Chinese flag, displayed on nuclear submarines, will inevitably follow. Against all this, the US does seem behind the curve; a Greenland purchase does not sound so over-the-top anymore.

This surge for dominance is virtually unregulated. Unlike Antarctica, protected by a treaty, the Arctic is open to sovereignty tussles, with nations claiming 200 nautical miles of exclusive economic zones and overlapping continental shelves. Add the complication that the US has not ratified the Law of the Sea and you have the makings of a wild North.

Only the Arctic Council, focused on environment protection and sustainability, regulates cooperation in the region. India became an observer to the council in 2013 after an intensive campaign, its credentials burnished by creditable scientific work in Antarctica. Interest in trade and resources was played down. Our contribution to the council, however, has been less than substantial. Scarce resources and competing priorities result in only token appearances at its meetings in remote destinations like Yellowknife and Whitehorse. Himadri, India’s research station on Svalbard, 1,200km short of the North Pole, remains the sole bright spot.

A comprehensive Arctic strategy should now be in the pipeline. Close engagement with Arctic nations, meaningful participation in council meetings, outreach to Arctic indigenous communities and sustained scientific work will play to our strength. Trade and strategic presence will follow.

Incidentally, the 1920 Svalbard Treaty conferred sovereignty over Svalbard on Norway. It also conferred equal rights of access, hunting, fishing and other economic activity on the other signatories, which include India as a British ‘dominion’. Bit of a schlep to catch a fish, but it is good to know.