Kerala is known for its diverse and heartwarming natural landscapes. However, we must consider a couple of points of caution in the face of such beauty. One is that we often take it for granted. The other is that it induces in us a sense of complacency, and we do not enter into a creative dialogue with such places. There are very few sociocultural initiatives and artists in Kerala that initialise such conversations.

A couple of weeks ago, I had the opportunity to return to a small island called Kakkathuruthu. Situated in the Vembanad backwaters, Kakkathuruthu was named by National Geographic’s travel magazine as the best of destinations. My friends Anoop Scaria and Dorrie Younger used to run an art residency there as part of Kashi Art Gallery initiatives. We used to hang around with artists like Rajan M. Krishnan, K. Reghunadhan, Upendranath, Jyothi Basu, Ratheesh T. and many others. 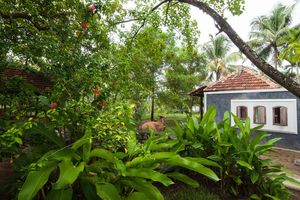 The island has fishing fields and coconut groves. You have to walk along narrow pathways, with water on both sides. You would walk practically through village homes, since most of them do not have boundary walls. Reghunadhan moved from Kollam, and started living and working in Kakkathuruthu. He is not just an artist but has also created beautiful pokkali paddy fields, combining culture and agriculture. He can also cook the best fish meals ever!

Another space in Kakkathuruthu is Kayal. US-returned engineer Maneesha Panicker took over the residency land and converted it into this small retreat space. Maneesha has been asking me and my family to experience Kayal since its beginning. This summer, I took up her offer and eight of my family members had an incredible experience. It is an ideal place for creative writers and artists. There is a similar place in the hills of Wayanad, in northern Kerala. I first came to know about Uravu at their exhibition in Bengaluru around the work of K.S. Lenin. He is a self-taught artist and the chief creative designer at Uravu. My kids are interested in art and design and we had also heard about Uravu from their friends. We were lucky to get a resort on top of a mountain with the help of Sivaraj and Saira from Uravu.

I was interested to see how Uravu developed their social interest and commitments with a community of bamboo craftsmen. Uravu was established in 1996 as a non-profit NGO for sustainable rural empowerment. Started by a collective of individuals who were determined to make a difference to the lives of the rural poor, they later delved into the wonder that is bamboo. Today, Uravu is a knowledge centre of bamboo—a one stop point for anything bamboo, so to speak—and are spearheading development of the bamboo sector in Kerala and beyond. We saw a great variety of species at the bamboo nursery, weaving and production centre.

Uravu has created a fantastic bamboo-architecture community space, where they have painting classes, talks and workshops. I wish this crafts village initiative had more economic support from the state and philanthropists. Uravu resort—the hospitality segment—has been designed by Swiss architects with the local craftsmen. They are developing a cafe and conversation spaces. It is an ideal place for an art and culture residency.

During my journey to Wayanad, I received a call from the writer Manoj Nair. I did not know it would be our last conversation. He was writing on several things—art, contemporary music, literature—and many things in the life of a genius are fated to be incomplete.