Death of a ferryman

Anoop Antony Scaria was exactly that: a ferryman. He took art, hospitality and music to many shores. But it had to start from one shore and that was Fort Kochi. I did not know much about him till he set up the pioneering Kashi Art Café. That was literally the beginning of art in Kochi. It gave the people in Kerala—starved of venues to see, discuss and display art—a platform.

He and his wife, Dorry, would invite unknown artists to his café and provide them all the facilities to further their practice. It was shorn of any selfish motive and was the result of pure love for art. They gave them food, space and loving company. There was a well-concealed altruistic selflessness in Anoop. And he had a vision when he began Kashi. 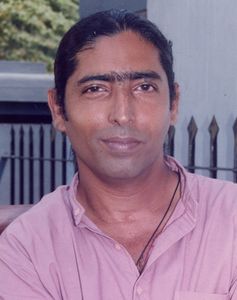 But, Anoop was backstabbed by the very artist he promoted, and he and Dorry left Kashi. Now, Dorry and their two beautiful children have to survive his permanent absence. He is no more. The vision has come full circle. Kashi has taken a new avatar, but it is not quite the same. Nobody could match Anoop’s zest, energy and ability to make art possible in Kochi. But the success of Kashi spawned a number of galleries in Fort Kochi.

One of the firsts that Anoop introduced to Kochi, and Kerala, was artist residencies. He set up a residency space and studio in Kakkathuruthu, a lovey island in Alappuzha district. Then, the Kashi Art Prize, which is being continued by the new owners of Kashi. There are many other things he started, one of which was the beach festival that has now taken the form of the Cochin Carnival. Then there was the tree festival during which he and his friends planted nearly 10,000 trees in Kochi. All of this happened before I got to know him.

I first met Anoop in 2003 during my show De-Curating. We bonded immediately and that was the beginning of a long friendship. Anoop and I insistently sought each other’s constant company. The first time I worked with him was for a group show, Remembering Bhupen Khakhar. Then I went on to do many shows in Kashi, some my own and some curated by me. I prefer not to list them here because it is painful to remember all of them at this moment. I invited him to be a part of ARCO Madrid as a participating gallery when I curated the India Pavilion. I also did several other things with him, one of which was giving an advance to buy property in Kakkathuruthu on the recommendation of Anoop and Dorry. Now I see it as an ominous sign because I never went back there.

The amazing and, of course, mouth-watering thing about Anoop’s and Dorry’s hospitality was the food they served. It was not the food that they served to their customers, most of whom were tourists, in the café. It was homemade food that both the couple and their staff ate. When in Kochi we could never think of eating anywhere else. Sometimes, we went to Shala in Princess Street. What I cannot forget is meeting a lot of artists, through them, like Upendranath T.R. and K. Reghunathan.

When Kochi became the art hub of Kerala, Anoop—the gallerist—turned out to be more interesting than the artists. He was not just a gallerist, but a friend to artists.

Gifted with a great sense of humour, among other gifts such as his handsome Native American looks, Anoop never resisted a good laugh though he himself was the butt of many jokes. He used humour to navigate situations when things heated up between competing artists. Even when he was fatally ill and bedridden, that jovial quality never left him. But then all good things must come to an end. And the ferryman had to leave.