Mahatma Gandhi’s Hind Swaraj was originally written in Gujarati in 1908. This book/monograph was a dialogue between Reader (the general Indian) and Editor (Gandhiji). In this, Gandhiji was against railways, one reason being the differentiation between third-class carriages (for Indians) and coaches for Englishmen, reminiscent of his experience in South Africa.

In 1917, Gandhiji wrote a vivid description (Third Class in Indian Railways) of travel by third class. He also consciously opted to travel only by third class. With aviation and road transport thriving (pre-Covid-19), young people from a certain socioeconomic class are more familiar with air travel than railways. For railways, they may know of Rajdhani, Shatabdi, AC-1, AC-2 and AC-3 tier, and CC (chair car).

There will be a figure that the Indian Railways runs 13,000 passenger trains and 9,000 goods trains every day. Such figures (on passenger trains) include suburban and specials. “Regular” passenger trains are just over 6,000 and most (around 4,000) are not mail/express. As much as 95 per cent of passengers travel on those 4,000 trains. They travel sleeper class or third class. They travel without AC and they travel unreserved. I should be more careful about nomenclature. The old third class formally became second class in 1977, without necessarily changing anything. 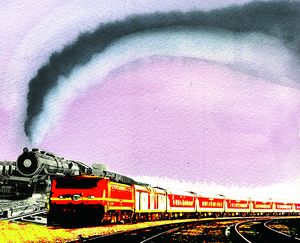 In British India, there was fourth class and inter class. Memories of train travel depend on age. I remember travelling first class, second class (old inter class) and third class. These were non-AC and non-corridor trains. I remember trains with steam engines, stopping for coal and water every 100km. You could get off and stretch your legs on a platform, and have a cup of tea. You could roll up the window and savour the scenery and soot. I remember third-class coaches without fans and lights. With 75,000 passenger coaches (today’s figure), change on all coaches cannot happen overnight. Third-class coaches started to have fans and lights only in 1959. So yes, I have travelled (short distances) on coaches without fans and lights. When there was a fan, it would often not work and there was a trick to get it going. You inserted a comb or a ball-point pen through the grille and nudged it. Prodded, the fan would start to rotate. Bars on windows started in the 1970s. So yes, I have travelled on trains where passengers clambered in through the window. I have travelled on third-class coaches with wooden seats, without cushions.

We had the first AC train in 1956, between Howrah and Delhi (with some limited attempts in 1952/53). At that time, it was called Air-conditioned Vestibuled Express. Neither AC nor vestibule needs explanation. (But non-AC third-class coaches were also attached.) Today, we know this as Poorva Express. Before someone corrects me, I should say the first AC train was Frontier Mail in 1934, cooled with blocks of ice. But that was different. There are engineering issues for AC, easier to handle in LHB (Linke-Hofmann-Busch) than ICF (Integral Coach Factory) coaches. As we move towards LHB (or train sets) for all of Indian Railways and 100 per cent electrification, why should sleeper also not become AC? It has been tried for Tejas and Humsafar.

Amid Covid-19, some decisions taken by the Indian Railways have not been noticed that much. One such is to make all trains fully air-conditioned post-Covid-19, initially on some routes. Old third-class will become AC-3 tier. In the absence of proper commercial accounting, it is difficult to estimate proper revenue/costs for the Indian Railways and fares are also administratively decided. Subject to that, among various classes, AC-3 is the most profitable. This is a good commercial decision, too. One day, everyone will travel reserved.