There was a recent news report about a resort in Coorg. If a guest wastes food, the leftover food will be weighed in front of the guest and a monetary penalty imposed, proportionate to the weight of the leftover. Money received through fines will be used for charity. This attempt to incentivise better eating habits may be unusual in India. But it isn’t new. A restaurant in Telangana also tried it, and there are instances from other countries.

A few years ago, we got figures through the ministry of food processing industries, flagging food waste during harvesting and transportation. Every year, 4.6 per cent to 15.9 per cent of fruits and vegetables are wasted. Figures are 5.2 per cent for inland fish, 10.5 per cent for marine fish, 2.7 per cent for meat and 6.7 per cent for poultry. In a largely informal economy, such numbers are naturally not robust. They are illustrative, and there have been government initiatives to improve storage and transportation. Food, from farm to fork, is a chain. It goes through four stages—production, processing, retailing and consumption. There can be loss or waste in each of the stages. Individual countries have different definitions of loss or waste and, therefore, country estimates may not be comparable. 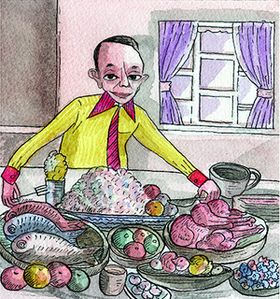 But there is a useful conceptual distinction the United Nations Food and Agriculture Organisation (FAO) makes. Food loss refers to food suppliers in the chain—production and processing; food waste refers to retailing and consumption. The issue is part of the Sustainable Development Goals (SDGs) framework now. Target 12.3 states, “By 2030, halve per capita global food waste at the retail and consumer level, and reduce food losses along production and supply chains, including post-harvest losses.” FAO estimates (slightly dated numbers) one-third of global food production is lost or wasted. Not surprisingly, food loss is high in countries like India and food waste is high in richer countries. To measure progress towards 12.3, the FAO is devising a food loss index and a food waste index. For countries like India, with data and informality problems, such indices are difficult to compute. The ministry of statistics and programme implementation has a national indicator framework for SDGs. In that, one will track post-harvest storage and distribution losses from Central and state pool stocks of wheat and rice. However, as India becomes more prosperous and urbanised, with more diversified diets, there will be a shift from loss to waste. Despite data problems, there are studies that show correlation between consumer affluence and food waste. Hence, food waste issues will become important as we go along, in some states more than in others.

I am surprised that many educated and urbanised people do not know about the Food Safety and Standards (Recovery and Distribution of Surplus Food) Regulations, 2019, or the Indian Food Sharing Alliance (IFSA), formed by the Food Safety and Standards Authority of India. Within food waste, there is the retailing bit and the consumption bit and decisions are typically taken by different entities. IFSA and entities awarded and recognised by IFSA are silver linings, because problems are resolved when communities and citizens also play a role. Unfortunately, so far as awards go, there is disproportionate attention on food awards and limited attention on food saving and sharing awards. Decision-makers respond to incentives and disincentives, the carrot or stick. This isn’t something where the stick works.

But there is also food loss at home. Studies in advanced countries tell us that food loss is more in higher income households; young people waste more than older ones; and food loss is a function of culture. We cook too much; we serve too much.