UP elections: Is the opposition giving the BJP a walkover?

As the host of a daily digital news show, I am bewildered by some of the issues our politicians manage to push into the headlines—and therefore on to prime time.

The referencing of Mohammad Ali Jinnah by Samajwadi Party (SP) leader Akhilesh Yadav is one such. Yadav’s comments may have been misrepresented by his political opponents, but why would Jinnah come up in an Indian election campaign at all?

Not just does it make gratuitous assumptions about the Indian Muslim voters—implicit in the reference is that they care about Pakistan’s founding father—it offers the BJP, on a platter, the perfect mix of distractions from issues of economic importance. 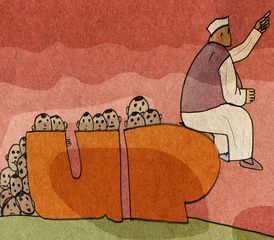 The most poignant tale to emerge from poll-bound Uttar Pradesh was the first-person accounts of abjectly poor citizens who came to retrieve the residual oil from Diwali diyas in Ayodhya. The holy city had been bathed in a blitzkrieg of lights with lakhs of earthen lamps sparkling during a festive week. But the reality check of rising prices left its shadow on the celebrations.

You would imagine that Covid-19 deaths, mass shallow graves of abandoned bodies and inflation would top the list of issues that the opposition parties would use to target the Yogi Adityanath government.

Instead, Akhilesh’s mention of Jinnah in the same sentence as Mahatma Gandhi and Sardar Vallabhbhai Patel has created the proverbial storm in a teacup. It may not have too many real electoral consequences either way, but it queers the political pitch in such a manner that identity politics and the fault-lines of history and religion become the dominant debate. And that is a debate that the BJP will always win.

The opposition—this includes the Aam Aadmi Party, the SP and the Congress—all seem to have pivoted right into playing some variation of BJP-lite. They are clearly and visibly anxious that the ruling party’s emphasis on hindutva, subsumed within the larger cover of nationalism, is an entrenched poll-winner. And so, for some time now, you have seen the Gandhi siblings drawing attention to their temple visits. Arvind Kejriwal has a list of religious pilgrimages that he is vowing to deliver on. And Akhilesh is falling back on imagined religious polarisation to craft his seat strategy.

Secularism may have become a corroded political slogan. But the problem with the approach of the non-BJP parties is that they are essentially playing by the BJP’s rule book—and on the BJP’s turf.

The UP chief minister has had a challenging two years because of the pandemic. An active grassroots opposition movement could have at least created a competitive playing field. Instead, the SP, clearly the dominant opposition, was dormant through much of the lockdown months. And Priyanka Gandhi Vadra, continues to make guest appearances in a movie where the ending seems to be pre-ordained—another likely victory for Adityanath. Despite her high-voltage announcements on reserving tickets for female candidates, her refusal to lead by example by running for chief minister, makes it difficult to take her seriously as a contender.

The opposition is not just divided; it is ideologically floundering. That confusion means—Advantage BJP.