Silencing media is not the answer

If the coronavirus pandemic were not enough of an existential challenge, it has been accompanied by an “info-demic” of fake news and rumour-mongering.

To that extent, concern about needless panic at a time when the country is fighting on multiple fronts is understandable. But the way to deal with that anxiety is to provide more information; not less. The way to encourage factual reportage and privilege it over unverified nonsense of the kind shared in many of our family WhatsApp forums is not to gag the media. The answer is to engage with the media—digital, print and television.

The government’s plea in the Supreme Court that nothing on Covid-19 should be published without an official response could be tantamount to gagging the media. The Centre argued in the court that rumours about a three-month lockdown is what led to the mass exodus of thousands of migrant workers.

I do not know which media outlet reported a three-month lockdown, and if any did, penalise it. Why punish the entire free press? As a matter of record—and I say this as someone who spent seven continuous days reporting from the ground as impoverished Indians walked the roads of our cities—if it were not for some of us who committed all our reporting energy on this story, we may never have seen transport provided for them.

Is it not our duty to ask why no one factored in India’s 45 million migrant workforce prior to the lockdown? Or to flag the fact that children as young as five and eight were on our highways; sometimes their fathers would carry them on their shoulders and walk hundreds of kilometres, while the women would carry life’s small belongings rolled into giant sacks on their heads. For three days, their plight was ignored by both Central and state governments. Relentless journalistic pressure is what saw something as basic as buses deployed for them. 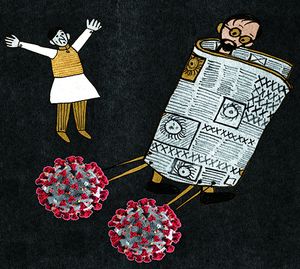 Yes, the deluge of thousands of people at the bus-stops was not good for the containment of the coronavirus. But again, that has nothing to do with the media. That was bad execution. For the first few days, there was literally no official representation at the capital’s borders. No one to stop them or talk to them or help them or divert them to shelters. When the buses finally came, there was no one to do elemental things like put pickets up every hundred metres and organise the crowds into a single file. Why blame the media?

It is journalistic robustness that highlighted the spray of fumigation meant for buses on labourers who were first made to sit on the road like a herd of cattle.

And, it is reporters who have highlighted the vulnerability in the food supply chain, the plight of farmers and fisheries, and the shortage of personal protective equipment for our health care responders.

No matter how much US President Donald Trump hates the media, he stands at the podium every single day and takes a barrage of piercing questions from the press corps. Here, a bureaucrat has been left with the responsibility of fronting media interactions. The prime minister and senior ministers have not addressed any press interaction. And the few video conferences or background briefings have been with only select media.

It is not unreasonable to ask that every report should seek a government or official response. Any solid reporter who seeks to balance her coverage should be doing that anyway.

But what does a reporter do if there is silence from the government or no response at all?

Surely, silencing us is not the answer.