By now we have all seen the videos of the mob assault at Jawaharlal Nehru University and the police complicity in enabling them. Much has been said and written about the masked vandals and the impunity with which they were allowed to saunter on the campus, holding their axes and iron rods.

Less has been said about the mayhem that unfolded outside the main gate of JNU as journalists and a handful of opposition politicians gathered that fateful Sunday night. As Yogendra Yadav was jostled and pushed around, and several young women spoke of being groped by the crowd, one needs to pay close attention to the slogans that went up. “Deshdrohi vaapis jao (anti-nationals go back)” were words hurled at some journalists. Even worse, as the street lights were switched off, slogans like “desh ke gaddaro ko, goli marron saalon ko (These are traitors, shoot them)” could be heard in the darkness of the night. The same slogans have been raised at rallies in support of the government’s divisive citizenship legislation. 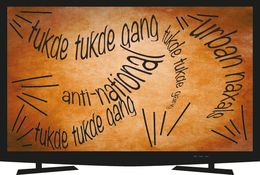 But the coarseness of the public discourse and the brazen incitement to violence cannot be placed at the door of the political establishment or the government alone.

The most shameful offender in this case is the television news media—the vast majority of it. Over the last few years, we have seen fulminating, hate-spewing television hosts, appointing themselves as the arbiters of nationalism. These men and women, many of who have never done a day of reporting outside the comfort of their studios, have mainstreamed the use of poisonous phrases like “tukde tukde gang”, “anti-national” and “urban naxals”. Today these reductionist and meaningless phrases have been co-opted by several top leaders of the BJP. But politicians will always seek to intimidate those who do not agree with them. What is the defence of the journalists?

The hashtag warriors of prime time could be laughed at and even ignored if they were not so toxic. The calls to violence outside the main gate of JNU, and the fact that those seen against the dominant narrative had their heads thrashed with rods and axes inside the campus, is a grim wake up call. Words have consequences. Violent, bigoted, hate-filled thoughts usually induce violent, bigoted, hate-filled actions.

The irony is that the reporters of many of the channels that have mainstreamed this language were also mocked and abused in the Sunday evening scrum. Their seniors and bosses must carry that moral responsibility.

In many ways, the last few hours have been the Indian television media’s darkest. There has been an abject unwillingness to question power and authority. There has been absolute surrender even when unasked for. But perhaps kowtowing to authority is less despicable than legitimising bullying and hate politics.

These channels have ensured that anyone with an alternative view is branded a traitor.

The debasement of our public debates, their aggression, hostility and the “other-ing” of anyone who disagrees with you is at least partly a consequence of the odious descent of TV news media.

Earlier the worst you could say about it—and I have been a practitioner—was that it is banal. Now it can be borderline evil.

Which is why it is uplifting to see so many protesters waving the tricolour, singing the anthem, carrying portraits of Gandhi and Bhagat Singh into their marches.

They are reclaiming nationalism—not just from politicians, but also from television news.