The cool marble floor of Gurdwara Darbar Sahib at Kartarpur, Pakistan, and the serenity of the lush green paddy fields all around it—fields which Guru Nanak Dev himself is said to have tilled—were at striking odds with the high voltage politics that marked the inauguration of the sacred pilgrimage route from India to Pakistan.

As a Punjabi whose family migrated from Sialkot during the partition, I was able to relate to the deep sentimentality of the moment. Shared language, history and culture, especially in Punjab, on both sides, have always complicated the dysfunctional love-hate relationship between the two countries. 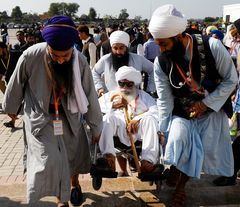 “Homecoming” was the word most often used by the Sikhs I met in Kartarpur. An old couple, originally from Patiala, had flown all the way from New York. Another set of friends—one of whom works in a post office in Houston, Texas—were making their first trip ever to Pakistan. As they bent to touch the floor in quiet obeisance, their hands folded in submission, most pilgrims were overwhelmed and close to tears. It was not just that they were in the final resting place of Guru Nanak, for many it was also the intensity that comes from an acute awareness of a ruptured past and the nostalgic, but painful, return to a country that was once home.

The rawness of emotion helped one understand why it was impossible for India to walk away from the Kartarpur project, despite grave misgivings in the highest levels of officialdom. In some ways the Kartarpur project was teflon-coated; it survived Pulwama, Balakot and the downgrading of diplomatic relations. When no other dialogue process has remained open, Kartarpur talks have carried on unhampered. As one official in the government told me: “We did not want to be held responsible for disappointing the Sikhs.”

India will be irritated at the political space that the Kartarpur project has afforded Pakistan. The shadow of Kashmir fell over Kartarpur in repeated public references. The Pakistan foreign minister lashed out at Prime Minister Narendra Modi personally in an interview with me. Delhi wisely struck a higher note by ignoring these attacks.

But I think we need not spend much time worrying on the Khalistan factor. Though fears have been expressed that Pakistan’s deep state would like to use an open, visa-free corridor as a project to revive Sikh separatism of the 1980s, such a reading undermines the intelligence and nationalism of a proud and brave community.

Sikhs I met in Kartarpur scoffed at the Khalistan theories. Jathas (collective groups) have been going across the border to other gurdwaras for years. Pilgrims were clear-headed in separating spirituality from politics. When the speeches began, and Pakistani politicians—including the prime minister—invoked Kashmir at the opening ceremony, a woman sitting behind me said to her travel companions: “This politics is wrong. Today is not the day for all this.”

The Sikhs are grateful to Imran Khan for enabling the opening of the corridor. But it does not make them one bit more sympathetic to Pakistan’s Kashmir push. They are in favour of an easier people-to-people contact with Punjabi brethren across the divide. But they were not happy at the Pakistani exhibit claiming, “The Indian Air Force dropped a bomb here in 1971”, or the images of Jarnail Singh Bhindranwale in the Kartarpur video.

The fate of the Kartarpur corridor cannot be delinked from the future of India-Pakistan relations. But while people-to-people contact may not bridge institutional divides, they certainly cannot hurt either.