There have been many disturbing moments in the election campaign of 2019—one of the most vitriolic and divisive polls in recent memory. But, perhaps nothing has the potential for greater damage than India’s armed forces being dragged into the centre of all the mud-slinging. Our men and women in uniform are meant to stand guard in the trenches; not to be pulled apart to either side of an ideological divide.

Many senior military officers I respect greatly explain that the engagement of the servicemen with politics began because of the institutional neglect of soldiers’ issues—one rank, one pension, pay commission disparities and now the non-functional financial upgrade debate. Soldiers who had led a cloistered existence within the parameters of a protected environment had to learn an idiom or language to speak for themselves. Because, politicians and bureaucrats would not. 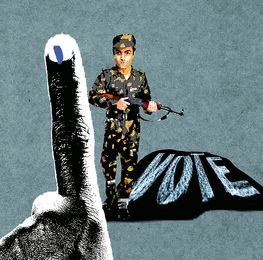 Fair enough. The problem is when the partisanship of soldiers becomes public. As anyone connected to the fauj knows, a soldier never really retires in the way that other conventional professionals do. An officer’s relationship with his troops and his regiment or paltan continues over the years and down the ranks. To suddenly see the commanding officer of your unit, or your army commander—and at times, even your chief—being reduced to the level of a political functionary can have all sorts of consequences.

First, there is the diminishing of stature. In my mind, a military chief is demoting himself by contesting to be a parliamentarian or a legislator. Then, there is the political cue a soldier-turned-neta may provide, inadvertently, in terms of party preference. And, last—this is a concern expressed by many military men themselves—there is the danger of an implicit quid-pro-quo in senior appointments and promotions.

In this campaign we have also seen the dangers of political ownership of military valour. Pulwama and Balakot have repeatedly been invoked in the election campaign to seek votes. Even the prime minister’s stage backdrop in the early days of the campaign was the pictures of the Pulwama martyrs. Families of soldiers who sacrificed their lives in the horrific terror attack have repeatedly said that they do not want votes to be sought in their names.

While tom-tomming nationalism, would politicians at least respect the sentiments of these families? They may call the rest of us anti-national—the lazy abuse of choice these days. But, they will not dare to use that description for the children of soldiers who died in the line of duty.

This week we saw a dismissed soldier of the Border Security Force becoming the Samajwadi Party candidate in Varanasi. While no one believes that Tej Bahadur Yadav is anything but a token candidate against the prime minister, the optics of a soldier—and several images of his campaign depict him in uniform—hitting the campaign trail are definitely disturbing. As is a slew of generals lining up to join either of the two national parties.

It is one thing for a senior soldier to offer expertise to a political party on national security, but it is quite another thing to become a party worker, MLA, MP, or even minister. Every poll tells you that Indians trust their armed forces above all other organisations. And, we trust our politicians the least.

Why do soldiers want to trade the romance of the uniform for the compromised realism of politics?

Will someone draw the battle-lines and keep our soldiers at the frontiers of integrity, away from the swamp of electoral politics?