Retired lieutenant general D.S. Hooda, former northern army commander in Jammu and Kashmir and the officer who steered the surgical strikes against Pakistan in 2016, is one of the most exemplary soldiers I have had the honour to know. This week, he reminded us again of the extraordinary ethos of the Indian military.

Speaking at the military literature festival in Chandigarh, the general was blunt: Overhyping the strikes and politicising military operations was unproductive and dangerous. “There was too much political banter on both sides,” he remarked dryly on the unseemly slugfest, point-scoring and bickering that followed the strikes. Had anyone else made these comments, he or she would have been called an anti-national. But, no one could dare question the wisdom of general Hooda, who had always led from the front.

His trenchant truths were one more illustration of how our military is so often more measured and moderate than our politicians. 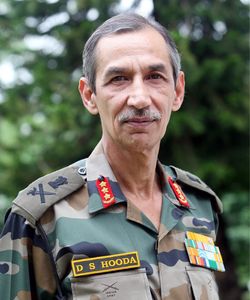 I recall reporting from the Kashmir valley in 2016 during a period of enormous turmoil. Burhan Wani, a local militant with enormous following among the new generation of Kashmiri separatists, had been eliminated in an anti-terror operation. Protestors had poured into the streets, and every day there were clashes between security forces and angry civilians. It should have been the job of the political class and the state government to own that decision and contain the fallout. Instead, as the situation unravelled, it was once again general Hooda who made an appeal to all stakeholders. He called for everyone—security forces, separatists, government, opposition and students to sit down around the same table and talk. He could have easily disassociated the Army from the turmoil—after all, policing crowds and steering dialogue is not the responsibility of soldiers. Instead, he took it upon himself to de-escalate the crisis and reach out across ideological divides. To me, that moment represented true and brave leadership.

The general has always been a conscience-keeper of the highest standards of the Army. In 2014, when two teenagers were killed in army firing in what was a case of mistaken identity, Hooda flew from Jammu to Srinagar to take responsibility for the mistake made by his men. His apology was unambiguous and speedy, and set an example for how to respond with sensitivity in a conflict zone.

General Hooda is a courageous soldier, and perhaps that is why he knows there is no valour in toxic machismo. He has consistently called for dialogue and a non-militarist perspective in Jammu and Kashmir. This does not mean that he has not deployed force when necessary. He has valiantly led his men against terrorism. He deftly steered the surgical strikes as retribution for the terror attack on his troops in Uri. But, he symbolises the reason that I am a signed-up fan of our military. Chest-thumping and arrogance is antithetical to the Indian soldier.

Our politicians, and above all our hyperventilating television news anchors, should learn a lesson in humility and genuine courage from general Hooda—a true soldier’s soldier.