In Kashmir, one man’s small hopes

Today if you talk of hope or peace or dialogue in Jammu and Kashmir, the words sound like tired worn out clichés and jaded formulas that have served their time. A veteran journalist has been assassinated; there is resurgence in local militancy; a democratically-elected government has failed to keep it together and positions have hardened and split people into ideological camps. In such bleak and suffocating times I have often felt terribly depressed about my own bruised relationship with Kashmir—a place I have loved deeply and reported from for 22 years.

So, when Jaibeer Ahmad, a 43-year-old advertising executive with JWT and also a Kashmiri, got in touch with me last year to say he wanted me to see a tourism film his agency had produced, I was sceptical. I wasn’t interested in a PR spin on a terrible ground situation but I forced myself to keep an open mind. To my surprise, the film, which captured the essential warmth of Kashmir, before it was battered by polarisation, violence, turmoil and terrorism, instantly made me cry. It triggered memories and a strange sense of loss—the kind you feel when you lose an old friend. 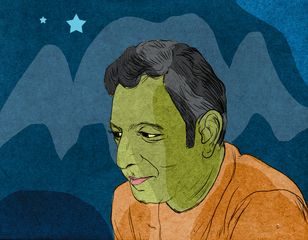 Since then Jaibeer has started what I think have been the two most meaningful peace initiatives within the state. First he curated a social media platform called ‘Reimagining Kashmir.’ Here we met a multitude of voices—a little child working to clean the Dal Lake; a young woman who was training to be a pace bowler; players of a private football league; a music band; a disabled rights activist. These were the sort of headlines that for obvious reasons never got news space. The rest of India had only known Kashmiris as militants or victims of militancy. Here they were real people and it was the very ordinariness and relatability of their dreams that brought them to life. What also kept them authentic was that Jaibeer has never pretended to draw simplistic meta-conclusions about ‘normalcy’ or resolving Kashmir from the stories he and his team share on this platform.

His second initiative is even more impressive. Called ‘Raabta’, which means connection in Urdu, it seeks to reconnect Kashmiri Pandits with Kashmiri Muslims as well as other communities in the state who may have been separated by geography, distance and time. The inspiration for this was personal. He told me that his 80-year-old grandmother always spoke of a ‘Dinanath Uncle’ who often dropped by at their home. The families grew so close that Dinanath was loved like their own son. “He was her third son. Every decision in the house was taken only after discussing it with him; this was also a time when there was a synergy in our religious practices. We visited the same shrines,” Jaibeer told me. The 90s and the enforced exodus of the Pandits drew a line across their relationship. But his grandmother never forgot and Jaibeer made it a personal mission to eventually reconnect them. He then decided to extend the initiative to reunite other friends and neighbours. This is perhaps the first intra-state dialogue initiative of its kind and in times when toxicity has made most conversation on social media impossible; it is remarkable for its gentleness and sentimentality.

Jaibeer’s small but sincere attempts at peace have achieved more than lofty Track Two and Track Three seminars. He has also shown that sometimes the personal is really the political. In a dark house with no sunlight or fresh air, at least he has cracked open a window.