What are we going to do about India's ‘about to’ syndrome, asks Anuja Chauhan

Recently, Virat Kohli put out a tweet asking people to stay tuned as he was about to share some tips on how to celebrate a meaningful Diwali. Immediately, the bhakts were all over him like a bad rash. “Bhaunk mat, Kohli (do not bark, Kohli)” started trending before you could say 'troll, baby, troll'; it was assumed he was “about to” ask people not to indulge in the ancient and sanskari Hindu tradition of lighting firecrackers, and pictures of the IPL finale were shared to prove what a hypocrite he was.

Putting aside minor quibbles—like um, we are the third most polluted country in the world, or were there any fireworks back in the day when Ram and Sita walked the Earth, or are most crackers not made-in-China and therefore unpatriotic or uh, the IPL happened in Dubai so why blame Kohli—let us get to the most problematic bit first. How did the trolls know what Virat was about to say? Because he has not even said it, yet! 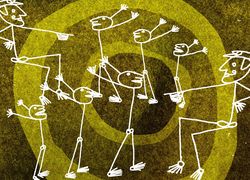 Just like stand-up comic Munawar Faruqui had not even made a single joke, anti-national or otherwise, when he was arrested on New Year’s Eve, on the charge that he was “about to” make anti-national jokes.

Just like Aryan Khan was arrested because he was “about to” smoke up the 6g of charas found in Arbaaz Merchant’s possession. Just like the film Padmaavat was banned before a single bhakt had even seen it because it was “about to” show a dream sequence featuring Alauddin Khilji and the Rajput queen, which was repugnant to Hindus. (There was no such scene in the film.)

Or, Priyanka Gandhi Vadra was detained before she could enter Lakhimpur because she was “about to” indulge in political opportunism.

This “about to” syndrome is disturbingly reminiscent of several cases in the United States when police officers “thought the perp was drawing a gun and was ‘about to’ shoot, so I shot him before he could shoot me” when actually the African-American man had just been pulling out his phone. Reaching for a more dramatic example involving the US, the pre-emptive strikes on Iraq also happened because it had and was “about to” use weapons of mass destruction.

Of course, this about-to-ness is massively selective. Indian women with creepy stalkers either online or on the ground, who fear that they are about to be raped, are routinely told by a callous or (badly trained) police that, 'Oho, it has not happened yet, na? Come back after it happens.'

The flip side of this whole 'about-to-ery' is that the citizenry is now paralysed with fright. Fabindia, a solid, highly respected, 60-year-old brand, has just retracted an ad campaign hours after the obnoxious Tejasvi Surya declared the headline Jashn-e-Riwaaz too Urdu-sounding for a festive collection and therefore upsetting Hindu sentiments. I assume Fabindia blinked because they feared Surya’s troll army was “about to” trash their stores and harass their employees. I wish they had stuck to their guns, and shown more spine in the face of this plainly ludicrous charge, like Manyavar did when its Kanyadaan ad was trolled. But like Tanishq last year, they caved.

The cycle is clearly one of intimidation and fear. Bollywood, once the fountainhead from whence sprung irreverent, syncretic, universally-loved blockbusters like Amar Akbar Anthony, Bombay, Jodhaa Akbar, PK, My Name is Khan and Bajrangi Bhaijaan, is obediently pooping out regressive, jingoistic turds on a regular basis.

I think it is safe to say that our most cherished institutions and ideals have gone beyond “about to” be destroyed to actually destroyed. What are we going to do about it?