Our PM is acting like a spoilt child, writes Anuja Chauhan

What times we are living in. The spokesperson of one political party just called the spokesperson of another political party a gandi naali ka keeda on national television. Loosely translated, that is a gutter-insect. She did not even sound particularly angry when she said it. She was all just super dismissive, and like oye, gandi naali ke keede, chup kar (Shut up, gutter-insect).

One decade ago, language this un-parliamentary would have caused a national outrage. Now? It just trended briefly on Twitter.

These are days of complete free-fall. Language, etiquette, institutions, law, order, method and protocol have all deteriorated entirely. Nothing works. Nobody is either responsible or answerable. Our PM is so upset at losing an election that he is waging a petty battle over real and imagined slights by an overworked chief minister who is just trying to do her job. Internationally, we are a laughing stock and a cautionary tale and we do not know where we stand on Israel-Palestine. Internally, our states are in revolt and our Centre is collapsing like a badly cooked cake.

And a country that once did a stellar job of bringing the demons of leprosy, polio, TB and HIV-AIDS to heel does not possess the institutional memory to remember what we did right then, or how to repeat it now. Because all that happened during the ‘60 years of Congress misrule’, and therefore must be utterly stamped out and obliterated, just like the Babri Masjid was. 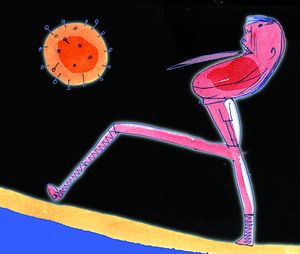 And so, a swarm of zealous kar-sevaks has descended on the Central Vista, that much despised, metaphorical Babri Masjid representing the old, secular, Congressi India. It has to be destroyed by the believers and a shiny new, obscenely expensive Modi Mandir has to rise in its place—a Modi Mandir so opulent that it will shut the mouths of us infidels forever. GOI evangelists will probably tell us that the cost of this monstrosity will be justified (just like the Statue of Unity) by the earnings from tourism, which will be so much that we will all get a direct transfer of Rs15 lakh into our personal accounts in one year itself. The fact that the thing looks like a spoilt child’s birthday cake and not a single architect or designer of any repute has anything good to say about it is immaterial, because our PM is acting like a spoilt child on the issue.

What is really ironic is that nothing ever gets discussed or debated anymore anyway! The farm bills were bulldozed through Parliament, nobody was consulted on demonetisation, or Kashmir or anything else. Last year, Parliament sat for just 33 days in all. So, if everything is anyway being decided by just three-four people why do we even need a new parliament?

Besides we are Indians. We are famous for ‘adjusting’. So even if we have more representatives than we had at the time of independence, why cannot they all just... sit a little closer together in the old parliament itself and save us a cool Rs20,000 crore, huh?

See, unity-in-diversity, and our old Central Vista are absolutely core to the idea of India. When our multi-cultural, multi-religious, multi-regional Republic Day parade marches down the Central Vista every year, it celebrates order, method, institutions, protocol, our collective learning as a nation, and sanity itself.

But these are insane times, I guess. In these insane times, people who use language as un-parliamentary as didi-o-didi and gandi naali ka keeda get to spread out in a fancy new parliament. While the corpses of the corona-dead pile up in shallow graves all along the Holy Ganga, awaiting the monsoon, so they can float down the river, reducing it to a gutter, and all of us to culpable insects.