So the august courts have concluded that the Babri Masjid pretty much fell down by itself. The hefty amount of photographic and audio-video evidence that the CBI submitted was dismissed because it “could have been tampered with”. The accused were acquitted because “nobody saw them making any hand gestures or in any other way exhorting the crowd to break down the mosque”. The fact that they were right there, sitting on a stage and watching as the demolition happened is not proof of anything apparently. There is a lot of focus on the “noise” and the “dust” that prevented anybody present from quite comprehending what was going on. And so, for lack of evidence, everybody has been declared blameless and squeaky clean, and BJP cadres across the nation celebrated with laddoos.

Give the propaganda makers a few years and they will have us swearing that it was Lord Ram himself who made the hand gesture that caused an earthquake to happen at the disputed site at the very moment the kar seva was being performed, and it was the consequent shifting and rumbling of the mighty tectonic plates that did the evil mosque in. (In fact, I am willing to bet good money that that will be the climax of the much-touted Kangana Ranaut directorial Ayodhya, set to release any time around a big election. So cinematically appealing and so much fresher and goose-bumpier than the other, always available but slightly bleh option, i.e., a Pakistani conspiracy.)

Of course, the verdict is an obscenity. What is equally obscene is that #Hathras is starting to look ominously like our new #Babri. 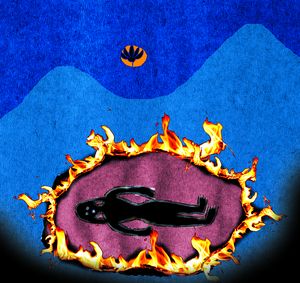 Attacked for merely existing, the Hathras rape victim, too, was knocked to the ground, violated, reduced to rubble and left for dead. Clear proof and a dying declaration are being negated as we watch, and loved ones are being brutally arm-twisted and muzzled. Worried perhaps, that the eye of the international press is on India post #BLM and about a new and growing awareness of the plight of dalits, and determined that Hathras should not become as big as Nirbhaya, the UP government has hired a fancy public relations firm to put out a version saying there was no rape at all! A damaging “alleged” is being tacked on to every mention of rape to snip the “false binary” between Hathras and Nirbhaya. Anonymous WhatsApp messages are assuring us cosily that the death was an honour killing carried out by the victim’s own family because she was infatuated with high-caste boys.

And, it is working. A sweet old lady in a white lace dupatta confided quite earnestly to me in my yoga class that the girl’s own mother had strangled her, broken her spinal cord and inserted a rod up her vagina. The sweet old lady had read all about it on her phone.

Following a policy of throw-everything-you-can-and-hope-it-sticks—again reminiscent of the Babri model—a line is also being trotted out about how the girl’s family are the tools of a shadowy foreign power that wants to destabilise UP and unleash a civil war statewide, because it is so jealous of the developmental leaps (LOL!) UP has made under Yogi Adityanath.

That will probably work too.

Going forward, we can expect more denials, more delays, more demonising of the victim and her family, and better strategy and spin than what is currently on display at the IPL.

To use current parlance, Hathras is being cancelled. Just like the Babri Masjid demolition was cancelled. With a wave of its all-powerful and super-expensive PR brush, the Adityanath government is whitewashing the whole gruesome incident just in time for Diwali. Because if you do not whitewash, Lakshmiji cannot be enticed into entering your home and blessing you with prosperity, na.