Let’s look to our aukaat!

So, in one of the new, ever-plummeting lows that have taken over our national discourse, the Bihar Police has sneered at Rhea Chakraborty for not possessing any aukaat. To be exact, Bihar DGP Gupteshwar Pandey has stated: ‘What is her aukaat that she dares to question the Chief Minister of Bihar?’

And Rhea, wracked with grief, weakened by badgering and as caught up in the circus as the next Indian, proudly replies, “My aukaat is that Sushant Singh Rajput—whom everybody claims to love—loved me.”

Sweet, I suppose. Very sound-bitey, and Kabir Singh-ki-girlfriend-ish. But, incorrect. 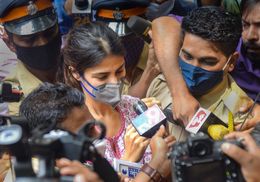 Because, no, Rhea, you do not need to be loved by Sushant Singh Rajput or any other major movie star to possess aukaat (an obnoxious, very north-Indian word, impossible to translate into English, but loosely meaning social status/power/wealth)—this is still a democracy and your aukaat as an Indian citizen and a human being is enough for you to question the chief minister of Bihar, or the prime minister of India or the Supreme Court of the country for that matter.

In today’s gangland style Kalyug, aukaat has become who we are loved by, or protected by, or in whose ‘camp’ we are. And as Rhea’s aukaat provider, ie, Sushant, is unfortunately dead, she is mobbed and grabbed and vilified every time she steps out of her house, a mere girlfriend in a nation where every man, woman and child is acting like a shrill, betrayed housewife, a shiny, helpless pawn in a much larger game of distract and misrule in a misogynistic story that is rapidly becoming about Mumbai versus Bihar—even as the economy spirals downwards, Kashmir continues to bleed, Ladakh is endangered, and all national institutions go slowly to hell.

These are crazy times.

And so the hour has come, ladies and gentleman, for all of us to look to our aukaat.

How much do we have? How do we assert it, protect it and project it?

I would urge all of you to take Kangana Ranaut as your role model. Here is a middle-class outsider who has earned some hefty aukaat! From being a defiant nobody who toed nobody’s line but her own, she has gone to being an obedient somebody who loyally toes the GOI line, and for her pains, she has been awarded with Y-plus security. (Because, you know, of all the death threats she has been getting.)

What is that you say? Swara Bhasker, Barkha Dutt and Rana Ayyub all get rape and death threats on a daily basis? Perhaps more than Kangana does? Yes, but clearly they are neither loved by somebody important, nor protected by a powerful camp.

Hmmm… now I am starting to wonder if aukaat equals Y+/Z+ security. Maybe stepping out of a vehicle surrounded by a posse of heavily armed and uniformed guards is what it means to signal that one is important. I mean, look how much aukaat the Gandhis have lost ever since they were stripped of all their fancy security!

Maybe, like the recent story in the Economist about billionaires paying to have a herd of skimpily-clad elite supermodels accompany them to every party so that they look all sexy and happening, the thing to do now, to have aukaat in India, is to hire a posse of sunglass-wearing, buff and tough security guards dressed all in black, and take them with you wherever you go, preferably with Yo-Yo Honey Singh or Badshah songs playing from portable speakers.

It is a clear win-win. Do it for Mother India.