Iron men, or feet of clay?

"If you really feel the urge to milk something, go find a cow,” read the rather terse headline of a print ad issued by a leading newspaper on March 20. Accompanied by the image of a scowling bovine, it went on to state that the publication would not carry any ad that seemed to take advantage of the panic around the coronavirus pandemic for personal or material gain. However, if the messaging was responsible, considerate and empathetic towards the situation, the publication would be more than happy to carry it.

This came a couple of days after Arihant Mattress claimed its mattresses to be ‘anti-coronavirus’and Patanjali’s Baba Ramdev claimed that its Giloy remedy could fight the virus. Such ads have prompted the self-regulating advertising industry watchdog, Advertising Standards Council of India (ASCI), to issue a statement that it would be taking action against companies that make unsubstantiated and irresponsible claims.

Every crisis is also a time of great opportunity, and there is nothing wrong with seizing that opportunity, but it cannot be denied that it is very difficult in these confusing times to figure exactly where the line between filling a genuine demand and the greed for profit or popularity begins to blur. And, there is no ASCI to regulate personal behaviour here—we have to regulate it ourselves.

So when we compose a song or a poem on the issue, are we really trying to educate people, or just you know, hoping to go viral and score an avalanche of likes? Or, when we post a video of ourselves banging a karchi (ladle) on a thaali (plate) and yelling Go-Corona-Go, are we really thanking essential service providers from the bottom of our hearts, or are we just trying to be more-patriotic-than-thou? Or indeed, as the head of a nation or a province, when we appear on television and address the citizens who elected us, are we just competing with the heads of other nations or provinces in a stupid game of one-upmanship, again for profit or popularity, or are we genuinely trying to do the best for the people in our stewardship? 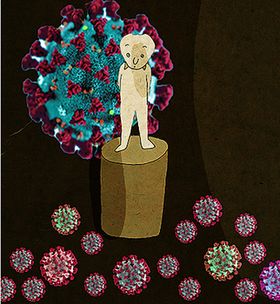 These issues are especially tricky for celebrities—if they donate money for coronavirus relief work, people accuse them of climbing on to the bandwagon and trying to ‘buy’ good publicity. If they do not donate money, people immediately throw Rihanna’s $5 million donation in their face and ask them how they are giving back. The nicest celebrities deal with this by giving very quietly. And this, in these deafening times when we are all reeling from the sound of utensils being clanged from the rooftops, is an example worth emulating.

Actions speak so much louder than words.

So if you are a regular person, put down your thaali. Go inside your house and quietly give all your domestic help paid leave for the month (a real test of patriotism this one and so much more difficult than thaali-banging!) Then clean your own home like a good Gandhian, do your office work, speak up loudly and fearlessly if your leaders seem to be waffling about, and for heaven’s sake, refrain from forwarding weird WhatsApp messages from opportunistic godmen clearly out to get famous.

If you are an elected representative, and human enough to want to shine during this crisis not just for the sake of the people who elected you but also for your own profit/popularity, know that this is the best shot at immortality you will ever get. Steer India through this crisis sincerely, with minimum economic and human loss, resist the urge to milk the situation, and you will have created a legacy far greater than the one that could be earned by raising an 182m statue of Sardar Patel, building a temple to Lord Ram at Ayodhya, or indeed, redoing Delhi’s Central Vista at the cost of Rs20,000 crore.

That is called having your milk, and drinking it, too.