Love, not lotus, blooms in Delhi

I will be honest, it has sucked to be a Delhiite in recent times. Because no matter where you go in India or the world, you are sneered at for hailing from what is known either as the ‘rape capital of India’ or the ‘pollution capital of the world’. One does try to talk weakly about our amazing markets, awesome food and ancient monuments, but ‘what can you even see in that ghastly smog?’ and ‘where can you shop? There are molesters everywhere’ shut us up. Because, after all, these are good and valid points.

And, in the last month, as the battle for the capital got darker and dirtier and more desperate, as the peaceful protests against the National Register of Indian Citizens were demonised, as Home Minister Amit Shah spoke of pressing the lotus button so hard that it delivered a ‘currant’ in Shaheen Bagh, as the Delhi Police turned on the very students and citizens it is paid to protect, as Agent Adityanath arrived to stir the communal pot with talk of biryani and bullets, as brainwashed young men waved guns and spouted propaganda, as MP Parvesh Verma told us that the Shaheen Bagh ‘gang’ (who, by the way, are 80 per cent women) was going to rape our daughters and sisters and Modiji was the only PM who cared enough about us to save them, as #DilliMeinDangay trended on Twitter, it seemed it might earn another title for itself—hate capital of India. 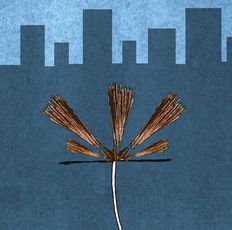 The louder the politicians got, the quieter the electorate became. Ominously quiet. Nobody knew what the silence meant.

And then came the story of a ‘Jai Sri Ram’ shouting mob from a pro-NRC rally forcing its way into a prominent Delhi girls college—Gargi College—during their annual festival, Reverie. While the mob gawked, groped, fondled and masturbated at the horrified girls, the principal attempted to hush up the matter, but thankfully the students proved to be way too gutsy and vexingly non-sanskaari, and would not sit quiet and hush when told to do so. Willy-nilly, the news spread through the city.

‘A fight for India’s soul’ was a phrase used to describe the Lok Sabha 2019 elections, and it was used yet again for the Delhi assembly polls. The turnout started out low, but then Delhiites are notorious for being fashionably late. By 6pm, a healthy 60-plus percentage had been achieved.

The moment the exit polls went on air, and it seemed that the Aam Aadmi Party was headed for a landslide victory, various tame anchors started to shame Delhiites for prioritising practical, mundane ‘selfish’ things like water, electricity, health and education over ‘noble’ issues like the nation’s safety and unity, terrorism and clamping down on the (80 per cent female) rapists in Shaheen Bagh. This was right in tune with the earlier BJP-driven narrative where giving up your gas subsidy or standing in line to exchange your old currency for new was seen as an honour and a duty by every patriotic Indian citizen.

But this is Delhi. We are... er... shameless. And also quite openly selfish.

The message we have sent out, which hopefully has delivered a ‘currant’ right into the thalamus of the BJP lotus, is loud and clear—less Ram, more kaam, thank you very much!

And with a thumping victory for the performance-driven record of the AAP (62 of 70 seats) and a resounding rejection of the politics of hate and vitriol as practised in this election by the BJP, I am, once again, proud to be a Dilliwaali.

Three days before what Asaram Bapu calls Matru-Pitru Pujan Diwas and the rest of the world calls the Festival of Love, our ancient, canny, blunt, profane, practical capital has rejected hate, chosen love and put the dil right back into Dilli. Happy Valentine’s Day, everybody!