You can always judge how organic a protest is by the kind of placards and banners people carry to it. If it is genuinely spontaneous and representative of a legitimate ground swell, its slogans will be varied, witty and original. And if it is a ‘bought’ crowd (strange how bought rhymes with bot), the slogans will seem on-the-nose, mass-produced and bland—sort of untouched-by-human-hand.

You know where I am going with this, don’t you? In the protests we have been seeing in city after city through the second half of December, the pro CAA+NRC+NPR rally placards have seemed robotic, while the anti ones have been evocative—Hindustan kisi ke baap ka nahi hai (Hindustan does not belong to anyone’s father), Hum kagaz nahi dikhaenge (We will not show our papers), The cow ate my documents, Hindu-Muslim raazi, toh kya karega Nazi (If Hindus and Muslims unite, what can the Nazi do). But the one that summed up the prevailing zeitgeist, for me at least, was the straightforward, pithy and extremely exasperated ‘Hindu hoon, chutiya nahi’ (I am a Hindu, not a dumbfuck). 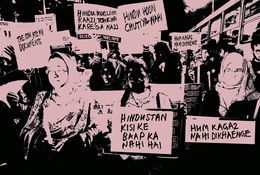 What a slogan! A slogan that can bring an entire ideology to its knees. I would have congratulated whoever came up with it, but its canny creator was smart enough to not own up to it. Perhaps, because of the brutal backlash peaceful protesters are facing in Uttar Pradesh or even because of ominous, passive-aggressive tweets like this one from the Bengaluru police on December 20: “Dear citizens, we are watching and storing every provoke posts, Please beware of spreading hatred for you own good.”

Putting aside the Bengaluru police’s execrable grammar and the ugliness unfolding in UP for the time being, let us delve deeper into this wonderful slogan, reminiscent in a way of the title of the 2010 film My Name Is Khan, in which Shah Rukh Khan (shamefully silent on this burning issue) proudly proclaims his Muslim identity, but disassociates from all jihadist ideology by repeating, “My name is Khan and I am not a terrorist”. The anti-NRC slogan equally proudly proclaims its Hindu identity, but refuses to be incorporated into the lunatic saffron fringe, by saying (I am personalising this to my name, feel free to do so with yours), ‘My name is Chauhan and I am not a chutiya’.

In the hit Avengers series, seriously messed up arch-villain Thanos murders half the people in the universe to solve a scarcity of resources. This is the same ‘solution’ hate-mongers have hit upon, arguing that if we get rid of all the ‘outsiders’ there will be resources enough for all of us—Hindus, Jains, Buddhists and Sikhs. It is good to see that kids as young as 18-year-old Sana Ganguly are clear-sighted enough to recognise this for the bullshit genocidal blame-gaming it is; to spot that there is no economic growth and no jobs not because the Muslims have stolen them, but because the government has not created any; and that it is, in fact, wrecking our economy at an epic level, and then dicking around with our national data and democratic institutions to cover up the hideous mess it has made.

The Muslim bogey, Pakistan bogey and the illegal alien bogey are finally being recognised for what they are. Students, thinkers and the intelligentsia—in the absence of any strong political leadership or Bollywood fire—are doing an admirable job of disseminating this recognition to the general public, which is not as privileged and educated as themselves, through slogans like my new favourite.

2019 has been a depressing year for people who care for the idea of India, but it seems to be ending with a bang. Tsunamis often strike in late December. When we think the year is all dusted and done, a national epiphany of ‘Hindu hoon, chutiya nahi’ could well be the game-changing tidal wave all genuinely patriotic Indians have been waiting for.