Will the real police stand up?

SOMETHING STRANGE is going on in central Bengaluru. As commuters intermittently cursed, weaved, honked and crawled through traffic along the choked streets of the “garden” city last week, belt-less in their cars and helmet-less on their two-wheelers, they were forced to pull to a screaming halt at the sight of a very fit and fair-complexioned traffic policeman, wearing orange-glow jackets, aviator glasses and a pollution mask, one hand raised commandingly over his (her?) head.

On closer inspection, this groovy Dabangg-like vision turned out to be a dummy. The Bengaluru Police have actually acquired thirty such dummies and are placing them at intersections where the traffic is thick and the misdemeanours many. The expectation is that the commuters, speeding along merrily, will see what they assume is a traffic policeman on duty, and immediately remember to be good drivers. 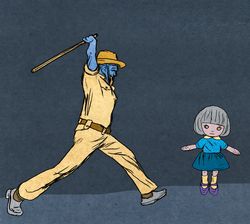 To further confound commuters, Bengaluru Police cunningly keep shuffling the mannequins in vans, from one intersection to the other. So just when you have started to relax and think, “hah, that is a dummy scarecrow cop, do they think that I am a crow?” and jump the red light, the plastic policeman turns out to be a real one, and bam, you have been handed a ticket.

The police have also started a rumour that some of these dummies have cameras in their eyes that record your every move, so even if they are dummies, the real dummy could still be you. Several real, retired cops have rubbished the move, albeit anonymously: “It will make people think that the police lie and are bound to be stupid. They will no longer take us seriously. People have already started posting selfies with these dummies, smiling, pointing and hugging them in a manner which is distinctly disrespectful. We will become a joke if this continues.”

In a fortnight when the police have been so much in the news, first for their tardiness in reacting to the Hyderabad vet rape case, then for shooting down the four accused as they allegedly tried to escape, and then for their role in the student protests in Delhi and the northeast, I find the plastic policemen of Bengaluru, standing sinisterly about the street corners, faceless, unfeeling, deaf and dumb, disquietingly representative of our police force in general.

They turn a deaf ear to you when you come in pleading for assistance. “Come back after you get raped,” the cops in Unnao allegedly told a young woman recently. But they smoothly switch to life when activated by the powers that be, thrashing, tear-gassing and opening actual fire on peacefully protesting students or “escaping” rape accused with impunity.

Many have invoked the Nuremberg Laws of 1935 to describe the ghastly other-ing that is taking place in our country right now. One of the key symptoms of that time was how automaton-like and alienated from regular folk the keepers of the law became.What must it be like to be a policeman today? Torn between the sexy, aviator-wearing, much-fetishised prototype of macho characters who gun down proven rapists with powerful connections, or the lobotomised, eager-to-please, selectively outraged prototype as seems to be flourishing under the ministry of home affairs nowadays?

To me, the Bengaluru mannequins seem to have adopted the worst traits of both varieties. A thinking, empowered police force, made entirely of flesh and blood, decently paid, highly motivated, gender-sensitised and politically neutral is the need of the hour, not a bunch of mentally-defunct, fair & lovely plastic dummies.