One only has to compare the handsome, heroic, syncretic Akbar from Jodhaa Akbar (2008) played by Hrithik Roshan, with the animalistic, fur-robed, blood-thirsty Ahmad Shah Abdali played by Sanjay Dutt in Panipat (2019), to see how much Oscar nominated director Ashutosh Gowariker has ‘evolved’ as a filmmaker, and how much we, the people of India, have ‘matured’ as an audience over the last 11 years.

The fact that this clearly biased film is releasing on December 6, the date of the demolition of the Babri Masjid, cannot possibly be a coincidence. It is just one more telltale sign that Bollywood—and even top-notch directors now fallen upon hard times with three flop films in a row—have no issues with pandering to the lowest common denominator, and in fact will do so with full gusto and an untroubled conscience, as long as it pays them rich dividends at the box office. 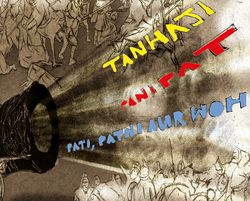 But why pick on just poor Gowariker? There is also Ajay Devgn’s Ffilms (no, that’s not a spelling mistake, it’s a numerologically propitious spelling.) Ya, so this Ffilm company has just released the trailer of Tanhaji, featuring Saif Ali Khan as a rajput general in the employ of the Mughals, taking on a righteous, strapping Devgn. Tanhaji is full of all the in-vogue tropes, you know lots of har-har-Mahadeving and talk of restoring the good old days when the bhagwa (saffron) flag fluttered over the happy homeland. Tanhaji’s wife, played by Devgn’s IRL wife, the purportedly woke Kajol, even mouths a dialogue about how, with hubby dear in charge, ‘the sacred threads of brahmins and the veils on the heads of women will remain safely in place’. Basically, she endorses the caste system and the subjugation of women in one crisp, block-buster ensuring sentence. Kajol! Our sweet, sorted Anjali from Chandni Chowk, who in the good old days when the Raichands were ruling the box-office and life was all Khushi and minimum Ghum, used to sing quawaalis at the wedding of her Muslim bestie!

It is all just too depressing.

And even if you look away from these cookie-cutter mythologicals, there is not much joy to be had. Just look at Pati, Patni Aur Woh, which is riding the other big wave surging through Bollywood currently, ie rampant misogyny. This one features popular heartthrob Kartik Aaryan making a comment that seeks to normalise marital rape. Thankfully, the comment got slammed so hard on Twitter that the makers of the film have had to remove it.

But my point here is that Bollywood is not full of fools. They are all highly intelligent people with huge entourages full of advisers, media-managers, financiers and strategists. They do a lot of research. So if stars appear on screen making statements valorising regressive thinking, it is not happening by mistake. It is happening on purpose. Kajol is endorsing a sacred thread and a ghoonghat knowingly, on purpose. Aaryan is bemoaning a man who extorts sex from his wife being called balatkari, on purpose. Gowariker is releasing his film on December 6 on purpose, with his eyes wide open.

So what do we do about this? Aaryan’s rumoured love interest, the very sensible Sara Ali Khan, said recently that we should not go to watch such films. If we do not go, then Bollywood will stop making them. Which, of course, is true.

But Bollywood is not just a mode of entertainment. It is, in this country still besieged with ignorance and prejudice, also a medium of education. Which is something that Gowariker, back in his heyday, when he directed Lagaan (2001), Jodhaa Akbar and especially the genuinely patriotic and idealistic Swades (2004), seemed to understand.

Maybe somebody should sit him down and run him through a retrospective of his own cinema.