It is so good that all of Bollywood showed up at Prime Minister Narendra Modi’s residence to discuss how to include Mahatma Gandhi’s philosophies in their films. The people who said the footage from the function looked like hostage videos released by kidnappers are just being mean. Didn’t Shah Rukh Khan describe the event as ‘very nice’? The fact that his usual choice of adjectives is awesome, tremendous, mind-blowing cannot possibly mean anything.

Then there was another bunch of cynics who said that Bollywood-flexing plus Pakistan-bombing is something our government does to ensure success before every election. Last time, it was ‘Rendezvous with Akshay Kumar’ plus Balakot, where we reportedly killed about 250-300 JeM militants. This time, it was Selfie-with-Shah Rukh-Aamir plus the artillery attack in the Neelam valley where we reportedly killed at least five Pakistani soldiers. 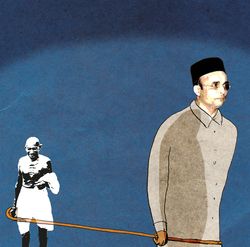 But I choose not to be cynical. I think the government is genuine in its professed desire to embrace the learnings of Gandhiji. And I will tell you why I am so sure. It is because they want to award a Bharat Ratna to Veer Savarkar.

Matlab, didn’t Gandhiji say embrace those who hate you, turn the other cheek and so on? Yeah, so he would have probably approved the fact that the man who popularised the term hindutva, who was passionately in favour of the two-nation theory and against the concept of a democratic, secular India that Gandhi died defending (some say at the hands of the disciples of this Savarkar) should be awarded a Bharat Ratna by a nation that the Mahatma is the father of (or at least used to be, till United States President Donald Trump declared his friend Modiji ‘Father of India’).

The fact that Savarkar, while imprisoned in the Andamans, wrote a grovelling letter to the British, whining about being caned and pleading for clemency and swore not to indulge in any revolutionary activities once released, could only have endeared him to Gandhiji, who loved the weak and the frail passionately. Gandhiji taught us to disdain the glittering people at the top and embrace the losers, and this government is doing precisely that.

Look no further than their admirably unimpressed attitude when it comes to ‘winners’. They have made it quite clear to Abhijit Banerjee that they are not to gush over him obsequiously just because he won a Nobel prize. They are way too Gandhian for that—never mind that Abhijit’s economic policies are actually policies that Gandhiji might have approved whole-heartedly of! And just before Abhijit, there was Ravish Kumar, whose Ramon Magsaysay award for journalism, went unacknowledged by Modiji—another admirable display of the Gandhian philosophy of not kowtowing to winners at work.

And then look at the tenderness with which the government treats the ones who were relatively unsuccessful. Like Abhinandan Varthaman, an IAF pilot who downed a Pakistani F-16, got shot down across the LoC, was captured by the Pakistanis and made to record a statement praising their treatment of him. Other governments might have berated him for this ‘failure’—even Modiji’s friend Trump had to say this about John McCain: “He is a war hero because he was captured. I like people that were not captured.’ But this government, being a true Gandhian, declared Abhinandan a hero, put his pictures on its campaign posters and awarded him a Vir Chakra.

They did the same with Indian Space Research Organisation director K. Sivan after the unsuccessful moon landing. Modiji himself took Sivan to his bosom in a heart-breaking, internet-breaking hug that silenced all criticism and ushered in a deluge of ISRO-loving tweets from the entire nation.

We are truly living in an India where winning is losing and losing is winning. Isn’t it (to use Shah Rukh Khan’s adjective) ‘very nice’?