Any executive producer worth his/her salt knows that on a daily prime-time soap there is no rest for the wicked. One has to run to stay in the same place, and continuously dream up new drama to keep the rankings amped. They also know that no matter how noble and high-minded the purported USP of the TV serial—it could be about a woman wanting to climb Mount Everest or becoming an IAF fighter pilot, or an open heart surgeon—what the audience really want to watch is: 1) Her romance with some alpha guy. 2) Her conflict with all these scheming chicks who are also lusting after said alpha guy.

3) Her skirmishes with alpha guy’s mom—her mother-in-law. Everything else is sheer window dressing.

And this is why, by the 50th episode of every ‘woman-powering’ TV serial ever made in India, you will find the fighter pilot, the surgeon and the mountaineer in some ghastly over-decorated kitchen, sindoor in their hair-parting, chooda on their wrists, all professional ambition forgotten, alternately gazing deeply into the eyes of their alpha-men as their breasts heave decorously below their pallus. 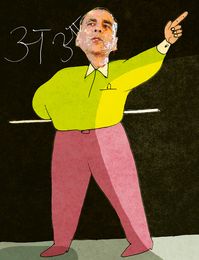 I think our esteemed home minister would make an excellent executive producer on a daily soap. His ratings would be way off the charts. He stirs the pot with so much finesse—and knows that while the theme song and stated purpose of his government is development and economic growth, what really gets the people stoked is sensationalistic ‘maha-episodes’ appealing to the lowest common denominator, new ‘tracks’ as it were—and on this Hindi Divas he has come up with a real humdinger—the introduction of Hindi as the ‘bhasha number one’.

I predict that this particular track will do well for the Shah soap factory as well as his other hit tracks—black money, temples, love jihad, beef-eating, surgical strikes et al—have done.

In fact, this one is good enough to be a movie even—fittingly titled ‘Hindi Hai Hum’, and starring Akshay Kumar, who would play an earnest Hindi government school teacher from Benaras, with a name to warm the cockles of the high caste cow-belt heart—Dubeyji/Mishraji/Pandeyji/Sharmaji. He would be summoned to Vidya Bhavan to meet a kindly education minister, who would tell him that he has been chosen to be the first government school teacher to be posted deep into the heart of the exotic, barbarous buffalo-eating north-east/idli-eating south India to teach the noble language to the unschooled savages there.

Dubeyji/Mishraji/Pandeyji/Sharmaji would humbly seek the blessings of his local temple priest, and journey intrepidly to this dangerous territory, and then, armed with the dohas of Kabir and the poetry of Maithili Sharan Gupt, he would diss the local barbaric languages, dole out karate chops to the chinkie/darkie locals who speak it, indulge in low, supremacist humour and eventually tame the savages and get them all high-paying government jobs. Oh, and to show he was a progressive fellow, he would romance one of the local lasses.

Of course, there are those who say that a government ought not to model itself on an entertainment factory—a hollow thing of sensation and spectacle. But no canny politician listens to these fools anymore. The only rider, as anybody in the entertainment business will tell you, is that people get jaded really quick. The gag or track that created a sensation a few months ago, becomes passe very fast. There are decreasing returns to scale. And so, inevitably, every hit show becomes progressively ghastlier and ghastlier till it finally implodes in a hot, hysterical mess of plastic surgeries, memory-loss, suicides, murders, rape and miracles-from-God, and has to be cancelled.

Currently, that is the only hope we have got.