Leprosy of the soul

I think it is pretty clear now that some fairly terrible things are happening in Kashmir. There has been a total lockdown for more than a month now, with seven million Kashmiris under virtual house arrest, their phones dead, their internet connections cut, and their democratic rights stripped away. It is the kind of high-handed, totalitarian situation that calls for outrage from the general citizenry, but the attitude that prevails in our big cities is one of quiet compliance and Government’s-Work-Is-God’s-Work. People who insist on “raking up” the issue at polite social gatherings are frowned upon as shrill, unmannered killjoys, totally lacking in etiquette, if not outright anti-nationals.

In fact “raking up” anything is considered impolite now. The broken economy, the resurgence of misogyny, the disappearance of buffalo meat from menus, the routine violence against minorities. These polarising topics interrupt the even flow of living room conversation and cast a dampener on social gatherings. Far better to avoid them altogether, and stick to the (increasingly shrinking!) list of safe topics we can all agree upon— like weight loss and fitness regimes, cricket, Bollywood and Hollywood gossip, and Brexit. 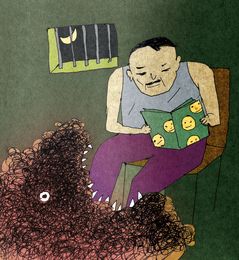 Apparently, the primary symptom of leprosy is desensitisation of the nerves. Basically, one loses the ability to feel pain, which in turn slowly and inexorably leads to the loss of extremities from repeated injuries or infection due to unnoticed wounds. Sufferers often notice nothing even as the disease inches inwards and upwards from the extremities to the vital organs.

Back in 2005, India claimed to have eradicated this dread disease through our public health programmes, but this was a false claim. Leprosy is still very much around, not just in its literal form, but also in a much more frightening avatar—a leprosy of the soul.

Desensitised, voluntarily lobotomised, dressed in our Navarata best, we chatter on brightly about nothing at all, even as around us, the powers that be declare that the gaps in Romila Thapar’s CV are bigger than the potholes on Bengaluru’s roads, or haul up journalists for recording a video of school children being fed roti and salt as nutritious midday meals. They are sinking their tentacles into over-the-top media platforms for airing “Hinduphobic” content like Prayaag Akbar’s Leila, and Hasan Minhaj’s Patriot Act, and are working to bring in a law that will be “aware and respectful of Indian cultural context when commissioning content”.

Meanwhile, in another country, a democracy much older than ours, a fading, ageing actor with his best movies behind him has had the guts to take on the prime minister no less, in language that is very far from parliamentary. Not that I am a fan of foul language for foul language’s sake, but surely is it not an indicator of the health of a democracy when citizens can speak up fearlessly?

“You will not f*** with my children’s future. You will not destroy the freedoms my grandfather fought two world wars to defend. F*** off you over-promoted rubber bath toy. Britain is revolted by you and you little gang of masturbatory prefects.”

Worse things than Brexit are happening in India today. But Bollywood’s favourite four letter F-word, “feel”, is totally missing from our reactions to them.

And, so, inwards and upwards from the extremities of Kashmir to the heartlands of our living rooms the disease will spread, dancing merrily to the tune of mindless songs from “historically accurate” biopics starring muscly, righteous non-Khan heroes and scantily dressed but sanskari heroines. Maybe we will feel something when it finally hits our vitals.