A small dot of black voting ink has been travelling slowly up the nail of my left index finger over the last two and a half months. This morning I find it has finally reached high enough to be snipped off. I am reluctant to do so. Recently, that black dot seems to be the only sign left to testify that we do, in fact, still live in a democracy. But I press down with the nail clippers nevertheless. And just like that, my nail is short and squeaky-swacch—all evidence that I had specially taken a Bengaluru-Delhi flight to cast my vote for an ailing, disunited, arrogant and corrupt party in a desperate, futile bid to ‘keep Modi out’ is gone. All that remains is the reality of Modi and Shah. Shah and Modi. What a jodi.

If you go on the internet today, all is triumph and celebration. There is no talk of the fact that Indian stocks have just seen their worst July in 17 years, there is no talk of Kuldeep Singh Sengar, BJP MLA and rape and murder accused, even though he appeared before a Delhi Court, there is no talk of the suicide of V.G. Siddhartha Hegde and what this government’s policies are doing to entrepreneurs across the nation. All is chest-thumping and rah-rahing. Everybody is suddenly a Kashmir expert, they know articles 370, 367 and 35(A) inside out, they hail the strong decisive leaders who have made Kashmir’s special status as defunct as a thousand-rupee note, they applaud the preventive detention of elected leaders, the snapping of internet, broadband and landlines of ordinary citizens, they speak glibly of PoK and CoK and clearly I am the one who does not know CoK. 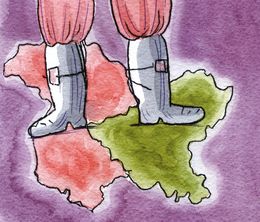 And so, I do not bother to even voice the obvious questions—why, if he had sworn to do tukde-tukde of Pakistan, is Amit Shah doing tukde-tukde of Kashmir instead? Also, what is to stop him doing this in your state tomorrow, huh? Or, make the obvious snide comments? Way to earn populist brownie points before the Delhi, Haryana and Maharashtra elections! Also, nice way to wriggle out of a state election you were 100 per cent going to lose—just dissolve the state itself.

And, as the feeble, headless mess that is the Congress makes spluttering, apoplectic noises and issues no consolidated reply even a day after the event, I just sit back and think about how insidiously clever the ‘Gujarat model’ is. How Modi and Shah go about regularly, scientifically feeding the goosebumps-seeking, reality show audience that India has become. The drama of demonetisation, the sexiness of surgical strikes, the zooming in on triple talaq, Modiji doing his very own ‘Discovery of India’ on Discovery Channel, Pragya Singh Thakur’s championing of Godse and subsequent maun vrat of repentance, there are cheap thrills on offer constantly.

Kashmir is just the latest. And, of course, this show of toxic masculinity, of stern correction, of thappar (slap) being an expression of pure, intense pyaar (love) is being lapped by a nation that has made Arjun Reddy a hit and Kabir Singh a super-hit.

Narendra Modi quoted from Star Wars during his much-touted New York visit, causing talk show host John Oliver to speculate (rather wittily) what he could have possibly meant by his random “May the force be with you” quote. Now that 28,000 extra troops have been rushed into Kashmir, Modi supporters on the internet are applauding the move and cackling gleefully, “See? He meant ‘may the Forces be with you!’”

The sickening eagerness and excitement with which we are willfully compromising our Constitution and surrendering our democratic rights makes me want to paraphrase a Star Wars quote, too.

“So this is how liberty dies. With thunderous applause.”