We need more of Virat Kohli's sportsmanlike logic of empathy

Nice of Virat Kohli to reprimand the boorish desis in the crowd for booing Steve Smith, who has started playing again after the one-year ban. They were chanting “cheater, cheater” at him so loudly that Virat could hear it; he came over to scowl and gesture at them to quit the booing and get clapping instead. The crowd piped down, Steve grinned gratefully at Virat, and the nation at large went gaga over this show of gentlemanliness by our skipper. “Aggressive player, benevolent man—so easy to love!” tweeted his wife, and a smitten nation agreed.

In the press conference that followed, Virat seemed rather startled at all the attention his gesture got, and stated that it was all quite simple, really. If he had done something wrong, taken his punishment, and come back to play after a ban, he would have felt really upset if the spectators had taunted him. That is why he had urged them to stop. A use of basic empathy and ‘do unto others as you would have them do unto you’ which we should see often in public (and private) life, but which is becoming increasingly scarce on the ground. 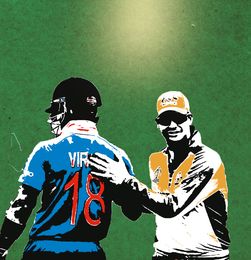 I found this gesture of Virat’s so much cleaner, and so much easier an example to hold up to small children, than all that brouhaha about M.S. Dhoni’s balidan badge. How to explain that to children now? Look, children, Dhoni is trying to show respect and gratitude to the Indian Army by wearing this badge, but the ICC will not let him, because their rules say that the logos on players uniforms must carry no political, religious or racial connotations.

Why does the ICC say this? The children may ask. Because politics, religion and race have no place on the sports field, where all players are equal, and the only ranking used to differentiate between them is their playing ability.

Children might even innocently ask that if Dhoni cares for the Army so much, why can he not just donate his match fee to them, or get a balidan tattoo, or (best option of all) play brilliantly, win the match and dedicate the victory to our Army instead? And, then, what would we tell them?

The whole thing smells of a needlessly ‘created’ controversy, the type that excites Twitter and gives our vacuous news channels an excuse to bang on bombastically about freedom of speech, while under-reporting genuine freedom of speech issues like the absolutely random detention of journalist Prashant Kanojia which happened pretty much at the same time. In fact I could not help noticing that some of them are not even calling him a journalist, but a “man” who “claims” to be a “freelance journalist”, in a tone that is clearly sceptical. This, when Prashant is an alumnus of the Indian Institute of Mass Communications, Delhi, with work experience in The Indian Express and The Wire Hindi.

Prashant’s tweet was actually mildly funny—it shared a video of a lady who was eager to marry Uttar Pradesh Chief Minister Yogi Adityanath, along with a message urging him to run away with her, adding that the nation would support him if he did so. Anybody less paranoid would have ignored it, but clearly the chief minister of UP is not that man. He has decided to use Prashant Kanojia to send out the chilling message that he is above the law, and not to be joked about.

It is really high time we all applied Virat’s simple, sportsmanlike logic of empathy and ‘do unto others as you would have them do unto you’ to our national situation. Come out in support of Prashant, because tomorrow, if (or rather when) we are not Hindu enough, not vegetarian enough, not respectful enough, not north Indian enough, not patriotic enough, we will need people to speak up for us, too.