Get up, dust your knees off, and learn

Ugh. The last time I was so pumped up, and proved so disastrously wrong, was back in 2007, when the Indian cricket team crawled back home from the West Indies after failing to make it to even the super-eights round of the ICC World Cup. It totally broke my heart.

There I was in my blue billion T-shirt, both cheeks painted bright blue, tirangas clutched in both my hands, a ticket to Jamaica all booked and confirmed, and there were my dreams, dashed to smithereens on the ground. 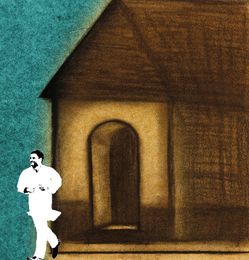 That team was led by a Rahul, too. It was the ‘strongest team in the world on paper,’ comprising the golden trinity of Rahul-Sachin-Sourav, not to mention young talents like Virender Sehwag, Yuvraj Singh and Mahendra Singh Dhoni. They lost to Bangladesh, barely beat Bermuda, then collapsed utterly in a must-win match to Sri Lanka and had to bow ignominiously out of the tournament in the preliminary round itself.

Young fans looking forward to the 2019 World Cup may not recollect this story, but the cowering, chastened team was actually herded into a police van when they reached the airport under the cover of darkness, even as fans bayed for their blood outside.

Of course, that particular story has a fairytale ending. There was introspection, overhauling, and brutal, large scale culling. Heads rolled, new blood gushed in, a talented, earthy new captain was appointed and empowered, and four years later, India finally had its fairytale ending, when our team held the glittering ICC World Cup trophy in their sweaty, triumphant hands.

Of course, I am guilty of gross over-simplification, but what I am trying to say is there is a lot to be learned from failure if one is grounded enough, hungry enough, and courageous enough to get up, dust one’s knees off, and learn from it. (Ask Smriti Irani!)

That is my fervent message to the Congress. For heaven’s sake, pull together and work bloody hard for a change. Introspect, overhaul, resign, recruit, reinvent, be brutally honest and dig deep to re-find the essence that makes you you.

Also, if Rahul wants to quit, then take the man at his word and let him quit. Find out what you are, when there’s no Nehru-Gandhi around to front you. And when you find out, tell us—loudly and clearly and unequivocally, without any me-tooing, and panicking and hesitation. Learn a lesson from the BJP—they have made it categorically clear that their dream is a Hindu Rashtra, and everybody who does not like the idea of that can just shut the f@#k up, roll up their Janamaz rugs and go live in Pakistan. Sure, Modi and Shah have to throw a bone to the minorities and mouth platitudes now and then, but this never confuses their workers or their supporters. They all remain quite serene and understand ki yeh sab toh kehna padta hai (it’s all lip-service); the real agenda remains Hindi, Hindu, Hindustan.

So, where is your inversely corresponding, uncompromising vision for India? Where is your clearly stated stand that people who oppose the Constitution of the Republic of India can just board their Pushpak Vimaans and go live in freaking Mahishmati? Where is your spine, your unequivocal stand on non-appeasement, and your zero-tolerance to intolerance?

Also, this time, do not take another three-and-a-half years to choose your next president. Pick one now. Or stick with the one you have got. Whatever. We do not really care. Just tell us what you stand for please (hopefully democracy, institutions, secularism, honesty) and you may yet become relevant once again. As a third Rahul once said, ‘Picture abhi baki hai’.