Said our prime minister in a rally, to a thin crowd of lustily baying supporters. (It loosely translates to ‘These are our principles.... We will enter your home, and kill you.’)

Of course, his fans—he still has many, though fewer than he used to—will rush to assure me that he was talking to Pakistanis/terrorists/enemies of Bharat Mata. It is their homes that he will enter, and because he is a man of principles, it is them that he will kill. 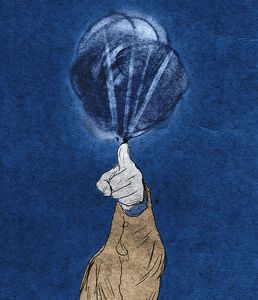 Trouble is, the definition of enemy of Bharat Mata is growing vaguer by the day. In our increasingly insular country, it is fast becoming the most inclusive club of all. Pretty much anybody can gain entry. Hindu, but don’t believe in idol worship? Congratulations, you are in! Hindu, but married a descendent of a ‘raped-by-the-armies-of-Muhammad Ghori’ Muslim or ‘converted-for-a-bag-of-rice’ Christian? In! Any sort of religious minority? In! Did not stand up for the national anthem because you are a decorated soldier who lost both legs in war? You are in, too! Dared to ask for proof of the death of 300+ Jaish terrorists in Balakot? In you go. Wondered why our intelligence agencies did not know that 350kg of RDX had entered Kashmir? In! Demanded why our fighter pilots—the cream of the cream of our armed forces—are defending our nation in rickety old MiG-21s, while the Tejas remains unready, HAL (Hindustan Aeronautics Limited) languishes, and our order of 126 Rafale jets gets whittled down to 36? In! In! In! Sniggered when the Vande Bharat Express broke down on its maiden run from Varanasi to Delhi? In! Reposted a Humans of Hindutva post saying that Hindu and Islamic fundamentalists both have loads in common? In! Asked why our prime minister was at his party’s rally, pushing his party’s agenda, and rabbiting on about his booths being sabse majboot (strongest), when the nation was at the brink of war? In! Raised an eyebrow when the PM publicly poked fun at the problems of dyslexic children and their anxious mothers? In! Drank a shot of Beefeater gin? Yup, you are in for sure.

And so, when my prime minister says that he will ghuso (enter) the homes of the enemies of Bharat Mata and kill them, I feel he is basically saying that he will enter my home and kill me. That is the definite feeling I get. This man is out to get me—a moderate, law-abiding, tax-paying Indian citizen, with a fondness for meat, and for hearing meaty answers to pertinent, reasonable questions, and a complete contempt for the fawning, snarling lapdog that is the Indian media today. I am sure I am not the only person who feels this way. Crores of others do, too.

I have stopped watching Indian news channels entirely, and I usually avoid Twitter because it is so damn toxic, but I did go there this week and was amused to see a lot of people proposing a very desirable switcheroo to Pakistan. “Take Arnab!” they suggested. “Take Arnab and give us back Abhinandan! Please!” To which clever, clever Imran Khan swiftly and politely responded—err, no thanks, here is Abhinandan back already, and you can keep Arnab, too.

A nation gets the media and the prime minister it deserves. Looking at the people we have got in the posts today, I have to say that we are a weak, vain, greedy and foolish nation and it is high time we mended our ways. Let us ghuso into those polling booths and vote in somebody genuinely majboot.