The right sexpert is here

We all have read those furtive, slightly frantic letters that come out in the ask-the-sexpert section of the afternoon newspapers. You know what I mean, right?

“Dear doc, my penis is crooked. Will girls laugh at it?”

“Dear doc, I kissed a boy’s scrotum. When will the baby be born?”

I have often wondered if the questions they ask are all made up—a way to get around the censors by pretending to be ‘medical’ while actually titillating readers. But they are all real, apparently. And, now, a frankly filthy, graphically gross, and touchingly vulnerable Netflix show called Sex Education—with the empowering slug line ‘experience is overrated’ and starring a sixteen-year-old male virgin who ends up playing sex therapist to his highly hormonal and ill-informed high school peers—is giving these distressed people all the information, reassurance and empathy they need. 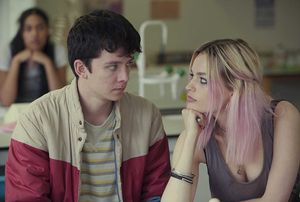 A Still From Sex Education

The show is set in a small town in Britain, but is hugely informative for anybody, really—age and nationality no bar. It has been a huge hit around the world and what I personally found so heartening about it is that, by giving sex exactly the correct amount of importance (neither too much or too little) and by addressing every single awkward, icky, gross and weird problem non-judgmentally and head-on, it is helping youngsters around the world leave behind shame and secrecy, and rewrite the codes governing sexuality and how the genders interact with each other.

I binge-watched the entire series last night, exhausted and dispirited after sitting on (yet another) lit-fest panel discussion on #MeToo, where we all debated the same, tired issues—why these women did not speak up before, are men going to stop hiring women because women could slap #MeToo charges against them, what about Hardik Pandya, do proven predators need to be shamed or maimed, how can the legal system be given more teeth, blah blah blah. But, when I finished watching all eight episodes, I felt marvelously rebooted.

Sex Education makes consent sexy. It makes pleasuring your partner aspirational. It takes pressure off the boys to always be stoic alpha studs who can never lose or shed a tear. It gives girls agency, does not objectify them or pit them against each other. It reassures kids that being a virgin does not equal being a freak. It dispels the myth that everybody but you is constantly having huge amounts of amazingly gratifying sex and that you are ‘a sad loser who will die alone, swallowed by your pet python’.

Even better, it does it in a way that is extremely entertaining, and while being all about sex, is strangely not about sex at all. But rather about self-acceptance, genuine communication, trust, courage, notions of success and fears of failure, family ties and friendships. The stuff of life, really.

The series is only one season old, but it has set off a tremendous ripple. In this jaded world, torn apart by a 100 billion dollar pornography industry, with men and women being pitched against each other in attitudes of mistrust and mutual exploitation, where every interaction has become a minefield, the constitution governing sexual/gender interaction desperately needed to be rewritten. And, I think the writers-directors who have created this series may have unwittingly become some of the key founding fathers to have done that job.

Chauhan is an author and advertiser.