Not an accidental flick

The poster of The Accidental Prime Minister makes me think of fancy dress competitions in junior school. You know, when your mum would put talcum power in your hair and fold her sari into two, tie it around your stomach and send you off to school as Indira Gandhi. If you were a boy, you would be stripped down to a little dhoti, have a flesh-coloured stocking stuck on your head, be given a pair of glasses and a long stick, and be instructed to murmur “Hey Ram” and keel over when the judges came over to talk to you.

Seriously, everybody on The Accidental Prime Minister poster looks like they are in fancy dress. Playing parliament-parliament. It is really weird. The inverted commas are just too much for me to handle. Like look, look, here comes ‘Priyanka’, complete with short, dark hair and a broadly bordered sari. She is talking to ‘Rahul’, who has dimples and a sneer. Here is ‘Soniaji’ with a ponytail, glasses and an Italian accent. And here is ‘Manmohan Singh’ walking around stiffly and speaking in a soft, hoarse voice and looking like a fatter-faced creepy sort of succubus of the real thing. 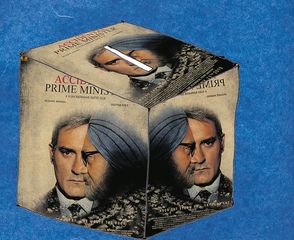 They are even worse than the inverted commas in Sanju, which really blew my mind. A perfectly nice-looking young man, who can act really well, pretending to be this much less-attractive older man, who cannot act for toffee. And oopar se, that whole overdose of “good-hearted rogue-ishness” and “poor-little-rich-boyishness”, and many protestations about how they were not making a hagiography (they totally were).

See, I have enjoyed some biopics. Like Dangal was nice (even though you knew the climax did not really happen that way) and Manto, and a while ago, Paan Singh Tomar. The songs from Bhaag Milkha Bhaag were lovely, and so was Farhan Akhtar’s body, even though the film managed to conveniently blame Pakistan for Milkha not getting an Olympics medal. I get that it is nice to be educated about the struggles and triumphs of underdog achievers from all kinds of fields. And, I totally understand that for actors looking for different (yet safe) roles, playing somebody famous and still-living could be seen as a challenge. So, I guess what I am objecting to is manipulative films, made with a mission to either whitewash or defame.

Anupam Kher was on TV recently, talking about The Accidental Prime Minister, and belligerently defending the timing of it, saying that “well, we release cricket-themed films around the World Cup and patriotic-themed films around Republic Day, so why cannot we release political-themed films around the elections?” And, of course, the interviewer was either too intimidated or too kiss-uppy to point out that “er, sir, that is because, unlike during the World Cup and Republic day, people vote during elections. So your film could directly influence the way in which way they vote, and surely that is irresponsible!”

But, he is not alone, is he? There is also Thackeray timed to release about now, and yesterday there was an absolutely ghastly image of Vivek Oberoi all dressed up as Narendra Modi. His look was so off that if there had been no words below the image—saying PM Narendra Modi—I would have thought it is a film about Shirdi-waale Sai Baba. Or Willie Nelson. Or Santa Claus.

On the other hand, what am I getting so worked up about? It is the era of fake news; lavish biopics starring big actors are the latest way to rewrite history and control the narrative, and the people who can afford to fund them are funding them. It is not very different from paying Beyonce to dance at your son’s wedding, really.