Reaching for our reserves

So, Urijit Patel has left the (nation) building. Initially, we all naturally assumed that he threw a hissy fit because he felt that the new turquoise blue 50 rupee note was not in quite the same swaggy league of awesomeness as the chocolate brown tenner, the bhagwa-orange two hundred, and the cool, indigo blue hunner. And that as colour and size of currency is the most important fiscal issue our nation faces, and as the bright green option Urijit was reported to prefer was just too Islamic in tone for a Hindu Rashtra, GOI was not willing to accommodate his quibbles….

But now it is being whispered that he probably quit because GOI was gunning for the RBI’s contingency reserves, and planning to use them to hand out populist sops and basically present a better picture of how our economy is doing ahead of the national elections. But as without its reserves, the Reserve Bank of India would cease to be the Reserve Bank of India, Urijit said ‘uh huh, no can do.’

And so, just like it happened with his very able predecessor, Urijit ka pack-up. 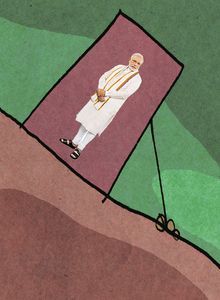 (Btw, a film based on the surgical strikes being carried out by GOI against India’s contingency reserves has already been shot and readied for release by Bollywood. The trailer has just released. It is called Uri.)

Fasten your seat belts for the free roller-coaster ride people, the good days are finally here. In fact they have been goodish for a while. 2018 began with four Supreme Court justices calling a press conference to draw attention to the government’s interference with the way cases were being allocated, and it is ending with this latest resignation by the head of the RBI. Along the way there were issues with high-ranking officers from the CBI and the Election Commission. These are all highly qualified professionals, men and women of intelligence and experience. When none of them can work with a government, it suggests that said government is exhibiting both high-handedness and low IQ, and repeatedly picking the expedient/populist short-term option over long-term nation-building. And that it is zooming into one key institution of Indian democracy after another, and—like an idiot child with an all access pass—banging them against the wall, and knocking the stuffing out of them, and generally phailaoing the raita, simply because it can.

In short, we thought the movie based on the Modi sarkar’s five years in power would be titled Glory Days, but it is turning out to be Dunston Checks In.

Of course it is not all just ignorance and arrogance. There is prejudice and hatred in the mix too, lots of low cunning, and an agenda of divisiveness and hate.

But we are used to hate in India. Every single party has in one way or the other used caste, religion and ethnicity to split us into voting silos, and yet, we have managed to survive it because at the end of the day, we are all still suckers for the unity-in-diversity narrative. Fond as we are of Ram Lalla, we are also pretty taken up with another devastatingly cute toddler, a product of two generations of ‘love jihad’, Taimur Ali Khan.

Anyway, I think that in seeking to access our figurative ‘crowd jewels’, GOI might have really gone too far. In Hindi movie parlance, this is truly izzat pe haath daalna. We will tolerate many things, we will eat chicken instead of mutton and we sing along to rejigged, syrupy renditions of our national anthem (another classic case of fixing what ain’t broke) and we will nod along while you lynch a few minority citizens, rename cities, and build vulgar statues that nobody asked for, but at the end of the day, chindi hain hum. Reach for our emergency reserves and we may finally snarl ‘enough’ and toss you over.