Having spent more than 20 years selling colas, chips and chocolate, I have a healthy respect for catchy slogans. I still remember the frisson I felt the first time I heard ‘Bolo mere lips, I love Uncle Chipps.’ My shallow, copy-trainee brain instinctively knew it was in the presence of deathless, immortal prose. That feeling of lip-smacking yumminess, of spice and salt and crunch and saliva all blending into one, and of course, the reassuring neatness of the rhyming—all conspired to create the perfect slogan. I decided on the spot that this would be the yardstick I would measure all my advertising writing against.

Good slogans always give you frisson. That is French for shiver—but it is more than just shiver. It means a sort of quivering skin-orgasm, complete with hair standing up at the back of your neck and pupil dilation. ‘Jana gana mana’ gives us all frisson, I am sure. So does ‘Jai Ho’ at the end of Slumdog Millionaire. 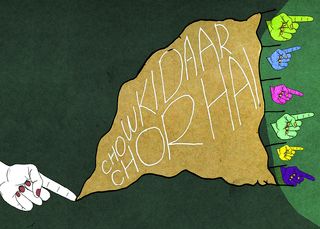 Good slogans should also always be a little tongue-in-cheek, or they run the risk of taking themselves too seriously. And finally (and most critically if we are talking about political slogans, which we are), good slogans should also invoke some larger insight, channel the zeitgeist, reverberate with what is in the hearts and heads of people.

There are several contenders for the top slot when it comes to the best political slogan of India. The simple, spartan ‘Jai jawan jai kisan’, (Glory to the soldier, glory to the farmer) coined by Lal Bahadur Shastri in 1965, which enthused soldiers to defend India and urged farmers to do their best to increase the production of food grains to reduce dependence on import, deserves special mention.

For sheer epic-ness and Rajinikanth-esque swag you simply can’t beat ‘Ek sherni sau langoor, Chikmagalur, Chikmagalur!’ (one tigress, a hundred monkeys, that’s the scenario in the by-election in Chikmagalur). In one simple sentence it reduced Indira Gandhi’s opposition to a bunch of cartoons and confirmed that no matter how deep patriarchy runs in India’s veins, reverence for the mother goddess runs even deeper.

There have been some cutsie slogans (rhymes about aaloo and Lalu come to mind), some that channelled caste angst (tilak, tarazoo aur talwar, inko maaro joote chaar ie, beat the bearers of swords, scales and tilaks with shoes), there have been deeply disturbing images of naked mothers in Imphal crying ‘Indian Army Rape us’, there has been talk of chests that are 56 inches wide and all kinds of tired two-liners about haath-and-saath, baar-and-sarkaar, but for sheer nation-shaking, mould-breaking subversiveness nothing quite packs the poisonous punch of L.K. Advani’s ‘Mandir Wahin Banaaengay’. (we will build the temple there only, ‘there’ being the site of the Babri mosque.)

Aaah, what a slogan that was. Along with Salman Khan and Boomer bubble gum, it ruled the nineties. It gave me frisson even though I hadn’t been inside a temple more than four times in my entire, fauji-brat life. Featuring ecstatic, muscular bhakts egging us on to break down a mosque all in the name of a sweet-faced, blue-skinned cherubic baby-God, it shook the country like nothing before or since.

And now, as always happens when the new slogans fail us, the BJP seems to be returning to its hit golden oldie. But this is 2019, not 1990, and I am not sure a remixed version of an old hit, even one featuring a rap solo by Mohan Bhagwat, can do the job. Meanwhile the Congress, after several false starts and a lot of talk of ‘Love’, seems to have finally stumbled on to a potentially winning slogan—‘Chowkidar Chor Hai’ (The security guard is a thief.) If used consistently, in context, sans hiccups or random winks, it may just be ironical and damning enough to do the job.