Uff, got so supremely riled seeing this Giriraj Singh person, union minister for medium, small and micro-enterprises, pull a lugubrious face after the whole wretched Ram Janmabhoomi-Babri Masjid shit-fest got stirred up yet again because of the Supreme Court’s adjournment of the hearing to January, and voice his entirely fake ‘concern’ that “Hindus are losing their patience. I fear for what will happen if Hindus lose their patience….”

Firstly, what the hell are you doing pulling a long face and ‘fearing’ the consequences? Surely, as a member of the elected government, it is your job to ensure there ARE no consequences? What is with the standing by and the hand-wringing? 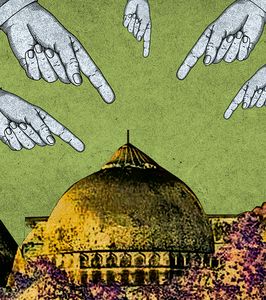 Secondly, please do not even pretend that all you want is for Ram Lalla to be happily re-ensconced in his rightful birthplace. You do not. Because, if he is indeed so re-ensconced, you will basically lose your shit-stirring stick. Or at least a few inches of it. And then people may actually turn to you and ask why, now that Ram Lalla’s status has been correctly updated, honey is not pouring down from the sky and the rupee is not yet equal to the dollar? And you will have to explain, waving your suddenly shortened stick, that this is because evil Muslim squatters still have control over Hindu temples in Kashi and Mathura. And all that work to do all over again.

Thirdly, your ‘concern’ is nothing less than an open threat. You are telling all the minorities in this country—‘urban Naxals’ like myself included—that we should all shut up and allow ourselves lesser and lesser space in public discourse, even as women are kept out of Sabarimala, minorities are lynched for eating beef, and laws are openly flouted, or some sinisterly awful thing will happen to us. You do not specify what. It is so much more effective to hint at the horrors to come and just leave things vague. As the makers of scary movies from It to Stree well know, the moment the monster is fully revealed, it stops being bone-chillingly frightening and starts to seem silly, pathetic even, and like it should really get a life.

Coming to Shashi Tharoor’s recent remarks, which is what got your khakis into such a twist in the first place, I have to admit that I have never actually seen a scorpion sitting on a shivling. (What a gloriously evocative image, btw!) But I have seen a colony of black ants trooping along one. The temple pujari noticed them, uttered a small, untroubled tsk-tsk-tsk sound, filled a plastic mug to the brim with Gangajal and poured it all in one sharp motion over the shivling, cleansing it instantly. So simple, na?

So please use your medium, small or micro-sized intelligence to understand that it is you and your ilk whom sensible Hindus are losing patience with.

We are starting to lose patience because you are trying to bang the same old drum hoping to get us to sing the same, sad tune. We are starting to lose patience with the fact that no matter how much you claim to hate all things western, you are most faithful imbibers of all things vilayati (foreign), including the sickening, cynical policy of divide and rule.

And, you are indeed very right to fear the consequences of what will happen if we do.