By the time you read this, mother/actor (in that order), Neha Dhupia may have delivered her second child. I met her a few days ago at a memorial service for a beloved common friend. She was full term and a little out of breath when she cheerfully told me the baby was due in a couple of weeks.

The former beauty contestant—who won the Femina Miss India pageant in 2002, and made it to the top 10 at the Miss Universe contest in Puerto Rico—was born in Kochi, 41 years ago, to a Navy commander and his homemaker wife. After graduating from the University of Delhi with an honours in history, Neha considered a career as an Indian Foreign Service officer, but opted for acting instead.

Having known her a little over the years, I can safely say Neha chose well and sensibly. She is a determined, focused and hardworking career woman, who does not allow advanced pregnancy to put brakes on her work commitments. She recently completed her latest film, A Thursday, playing assistant commissioner of police Catherine Alvarez.

Such an option was unavailable to an earlier generation of female actors, which made so many of them either shun or defer motherhood, or even terminate pregnancies. Today’s ladies are far more confident about their worth and positioning. They have cleverly converted what was seen as a ‘liability’ (a so-called ‘bloated’ body) into a marketing tool. Like Kareena Kapoor Khan, who capitalised on each phase of her dual pregnancies, paving the way for others. Neha was aggressively trolled and fat-shamed on social media post-baby, but that did not deter her from fighting back and reclaiming her body!

Neha’s filmography is not particularly impressive, but she does have a substantial following on Instagram (4.5 million), a platform she uses effectively to promote not just herself, but some of the charitable organisations she supports. There is authenticity in her posts, which connects well with her followers and leads to lucrative brand endorsements (paid posts). 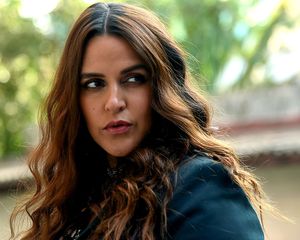 Neha’s overnight marriage in a gurdwara to fellow actor Angad Bedi, and the birth of her daughter a few months later, made her a hero in the eyes of her fans. That little girl is five years old today, and features frequently in her doting mom’s lively posts.

As a competent podcaster of #NoFilterNeha, she has garnered 2.3 million listeners, with her guests (Kapil Dev, Rana Daggubatti, Bhumi Pednekar) candidly sharing personal aspects of their lives sans inhibition.

Being besties with the likes of Karan Johar and Soha Ali Khan has provided a valuable leg up to Neha. It came as no surprise when Soha hosted a surprise baby shower last month for the radiant mother-to-be.

I admire professionals like Neha who go about their lives minus the unnecessary starry airs frequently adopted by the film fraternity. She remains feisty, but approachable, and behaves ‘normally’ in public. It is a trait I had noticed way back in 2014 when we were in Colombo together. She was with her mother, and I was travelling with my daughter. I had to stay back for work, and the three returned on an earlier flight. Neha behaved like a concerned older sister and took good care of her nervous co-passenger.

When we discuss ‘role models’ in our midst, we often overlook individuals like Neha—who is managing her life and its varied demands with admirable panache. Check out her Insta tribute on Teacher’s Day—it is personal, warm and sensitive, seen through the eyes of her daughter, and deals with the trauma of virtual teaching. Neha thanked overburdened teachers for seeing their students through the pandemic, without demanding any concessions.

We need more Nehas to keep our spirits afloat, for who can say when this Covid-19 nightmare will end?