Bobde and the bike

The Beatles wrote the evocative anthem, When I’m 64, in 1967. It opens with the lines, “When I get older, losing my hair, many years from now…” and innocently asks, “Will you still need me, will you still feed me, when I’m 64…”

The Chief Justice of India, Sharad Arvind Bobde, who assumed office on November 18, 2019, is 64, and from the snazzy pictures of him riding a limited edition Harley Davidson CVO 2020 recently (albeit, minus mask), it would appear he is still a rockstar with a headful of hair. Take that, Paul McCartney and John Lennon! A man of 64 in today’s day and age is certainly a far cry from the version depicted by the British popstars. And going by Bobde’s varied interests, which range from vintage automobiles, to mean machines like the bike he was ‘caught’ on this week, it is obvious our chief justice is quite a dude we like!

There are several versions of what exactly the Easy Rider was doing on a bike that sells at approximately Rs 51 lakh. One version says he was not exactly riding it, but was astride the beauty. Another hastily clarifies that the bike does not belong to the CJI in the first place and the real owner is the son of a BJP bloke in Nagpur. Another post blames the dealer of the bike, claiming he milked an innocuous enquiry from the CJI to gain mileage from the publicity garnered. While yet another post talks about the bike being a part of the CJI’s post-retirement plan. Whatever! Can’t a guy go for a roaring spin on something as sexy without so many questions being raised? Our CJI sounds like a really cool person, being an environmentalist, music lover, keen photographer…. What more do you want?

His track record as a judge is as interesting as he is. So is his lineage. His great grandfather was a noted lawyer, and his father, a respected advocate general of India. As the 47th and current CJI, who is due to retire in April 2021, Bobde has been in the news for delivering several important (and controversial) judgments in recent times. 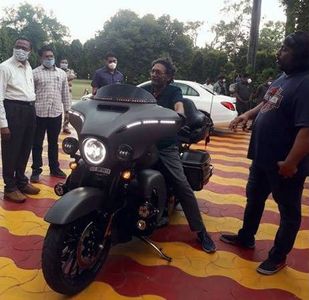 It is pretty refreshing when men and women in such hallowed positions allow their more informal sides to be viewed in the public domain. Our Nagpur-born CJI is one such individual and I do hope all this publicity does not inhibit him from sharing his Hell's Angels persona with the public.

For too long, we have slotted our judges into pre-determined compartments and not allowed them to breathe and just be! The image of the chief justice of India racing down a highway on a sleek bike is pretty modern and attractive. It breaks the mould and instantly strikes a rapport with the young of the country.

I would love to see many more judges and other eminent personalities pursuing their passions without feeling coy. My only grouse in this case? Someone attempting to ‘justify’ the photograph suggested the CJI did not actually take that gorgeous monster for a ride, he merely climbed on! That is a little like that unforgettable Bill Clinton admission more than 25 years ago when the former president of the US sweetly assured his loyal countrymen that he “didn’t inhale…” marijuana smoke! Come on, guys. We are all adults with our own favourite leisure activities, okay? If bikes are the CJI’s big thing, so be it! How amazing!

Roarrrrrr away, dear sir. We are keeping an eye on you… and the speed limit. Next time you decide to go for a chakker, do take our vahini, your wife Kamini (plus two masks), with you. Easy Rider… have a great time!