Uddhav comes into his own

I first met Maharashtra’s 19th and current chief minister long ago at his family home, Matoshree, when his father Balasaheb Thackeray was, by far, the most feared leader in the state. Uddhav’s gracious mother, Meenatai, and his charming wife, Rashmi, played perfect hostesses, as a delicious and lavish meal was served in thaalis. Uddhav was observant, pleasant and quiet. We see a completely different man these days as he firmly steers his state through the Covid-19 crisis. Last week, he sent out a stern warning to citizens saying his government would not tolerate any attempt to create communal disharmony. His no-nonsense attitude turned several hardcore critics into reluctant admirers.

It cannot be easy being Uddhav Thackeray. He is 59 years old, and just about coming into his own. Even though he took charge of the Shiv Sena after Balasaheb’s death in 2012, and also of the party mouthpiece, Saamana, his mild manners and lacklustre delivery at rallies left followers disappointed. They were accustomed to the fire and brimstone style of his father and of his more flamboyant cousin, Raj. Ironically, Raj is now out in the political wilderness, despite the showmanship, while Uddhav has emerged stronger by the day. Such is politics!

The Uddhav I appreciated had nothing to do with politics. I admired his talent as a photographer. Uddhav’s approach to his passion was that of a crack professional. It was not just a weekend hobby for the man who graduated from the prestigious Sir J.J. Institute of Applied Art. When he came over to show me the dummy of a book he was planning to publish, he shared his work with infectious enthusiasm. I was most impressed by the quality of the photographs, especially the aerial shots clicked from a helicopter. We spent considerable time discussing each frame, and the book was later launched at the Jehangir Art Gallery. 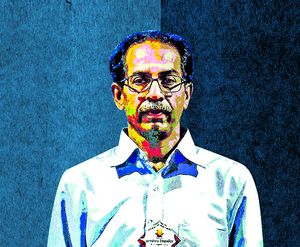 His first few years as a full-fledged politician were not as well received. Critics wrote him off for not being more outgoing, more dynamic and more assertive. In a way, this is when he cut his teeth, and, I am guessing, he quickly figured the old style of bullying and browbeating Mumbaikars had become passe. Besides, Uddhav has had two very dependable allies right in his home—his ambitious and good-looking wife, Rashmi, who has taken over Saamana, and his older son Aaditya, currently a junior minister in his cabinet. Nobody had expected the strange alliance with the Congress and the NCP to last. But then, nobody had anticipated the outbreak of the killer global virus, either. Some leaders need a mega crisis to reveal the stuff they are made of.

I have never understood our fascination for macho netas, who bare their fangs to keep citizens in place. The only quality a true leader needs to inspire people is trust. Our elected representatives often forget they are in office to serve us, and are obliged to guide us through tough times. So far, Uddhav has acquitted himself pretty well. He has projected resolve, not intimidation; a huge difference. A reign of terror is already upon us in the form of a microbe. We certainly do not need to see people behaving inhumanly towards their fellow beings. Uddhav has assured his people that his administration will work strenuously for all, regardless of one’s caste,

Going forward, one would like to see him push Maharashtra forward economically. This will need a more aggressive tactic. We are okay with focused aggression. It was the other far more misplaced one that citizens were sick of, since it came at a huge cost. We like the new and improved version of Uddhav. Let us hope he stays this way.