President Xi Jinping has stopped colouring his hair. Recent photographs of the Chinese leader show him with streaks of grey. While going grey is part of the ageing process, going grey suddenly is a sign of either ill health or distress. Hence, some view Xi’s display of grey as an attempt to show his people that he cares, that he is worried about their welfare, that he is working extra hard in these difficult times. Those of us who have allowed our hair to grey naturally, have never coloured it through good times and bad, happy times and stressful ones, would view this hirsute deception with both amusement and distrust.

When political leaders and entertainers colour their hair black, it is to show that they are still energetic and young. But, when a politician seeks to hide his grey it could be viewed as evidence of a willingness to deceive. Can one trust a person who colours his hair to be transparent in other matters? So, Xi’s decision to stop colouring his hair may not be just about demonstrating his concern for the health and welfare of his people. Its subliminal intent could be to win the trust of a people that are becoming increasingly distrustful of their political leaders.

The Chinese have been largely stoic in the face of Covid-19, but public protests are on the rise and the subdued anger of an anxious people is beginning to show. Winning public trust is a key imperative of effective public policy. In the age of mass communication it is necessary for political leaders to be seen as being concerned about people’s welfare. So, it is not surprising that faced with visuals of thousands of urban poor walking miles to their distant rural homes in sheer desperation, escaping a lockdown of their livelihoods in the name of protecting their lives, even a macho politician like Prime Minister Narendra Modi was forced to ‘apologise’ for taking this tough decision. 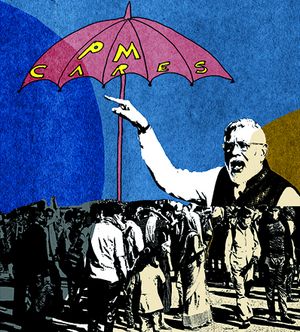 That was a decent gesture on his part. However, in an unthinking moment, Modi seems to have fallen prey to the sycophancy around him by launching a people’s fund for treatment of Covid-19 victims with the wearing-my-concern-on-my-sleeve acronym PM-CARES (Prime Minister’s Citizen Assistance and Relief in Emergency Situations Fund). After his convincing victory in the last general elections, Modi does not require a fund named “PM-Cares” to convince people that he does. Was it hubris or plain incompetence that such an in-your-face name got approved? Some would view it as a sign of political weakness, like Xi’s grey hair. When politicians find it necessary to convince people that they care, then they are merely admitting that they think the people think they do not.

Will people concerned about Covid-19 want their governments to be merely caring or also competent? When each one of us has to go to a hospital, we seek both qualities in the doctor we consult—empathy and competence. When it comes to health, competence scores over empathy. Merely demonstrating concern for peoples’ distress without following it up with competent action is not going to win brownie points for politicians in power. On the other hand, there are different levels of public tolerance for incompetence in different societies. It is possible that in today’s China there is much less tolerance for incompetence than there was in Mao Zedong’s China in which millions died in famines. The question for Indian leadership, in Centre and states, is how much incompetence will the people tolerate merely because their leaders say they care.