One good consequence of the defeat of the Congress in the general elections of 2014 has been the number of good books that have been written by Congressmen like Shashi Tharoor and Jairam Ramesh. Following up on his highly readable biography of Indira Gandhi’s principal aide P.N. Haksar, published in 2018, Jairam has now published a 700-page biography of V.K. Krishna Menon, India’s defence minister at the time of the Chinese incursion of 1962.

Historians and political scientists will benefit hugely from Jairam’s painstakingly detailed account of Menon’s role in India’s freedom struggle, his international articulation of Indian interests before and after independence, and his influence on policy at home and abroad through the first two decades after independence. To me, the most interesting part of this voluminous book was the detailing of the relationship between Menon and Nehru. 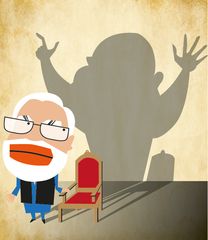 The office of the prime minister is the loneliest political office in India. Many prime ministers have been very lonely individuals even in their personal lives—widowers, widows and bachelors—and Nehru was made lonelier by his upbringing. Menon was among the very few in Nehru’s council of ministers that came from a social milieu that Nehru felt most comfortable in. It would have been no mere happenstance that both shared a unique social intimacy with the Mountbattens.

Menon and Nehru were two peas in a pod, but Nehru’s personality was shaped both by his long and deep involvement in the freedom struggle at home and his intimate association with Mahatma Gandhi. Menon fought for India’s freedom in the halls and on the streets of England, and then in the elegant world of diplomacy. He touched Indian soil only after convincing Nehru that he should induct him in his council of ministers. Jairam shows how their tenure as cabinet colleagues created tensions. Nehru had learnt how to function in New Delhi’s political milieu. Menon seemed to think that switching from Savile Row suits to dhoti-kurta was about the only transition needed. Nehru spoke in Hindustani. Menon hardly knew his own mother tongue.

Of the many dimensions to the Menon-Nehru partnership that Jairam brings out, the one that may resonate today is how Nehru was made to pay a price for his friendship. Many around Nehru wondered why the prime minister was so accommodative, so tolerant, so indulgent of a man who was so unlike Nehru. The officialdom, the diplomats and even most political colleagues of Nehru loved the man. Few felt so endearingly towards Menon. So, when opportunity presented itself—in the form of India’s inability to defend itself against Chinese aggression—everyone around the prime minister wanted the defence minister sacked.

An interesting anecdote from among the many is the one about Admiral R.D. Katari informing Nehru as early as in 1959 that he, too, wished to quit as Navy chief, after General K.S. Thimayya had sent in his papers to the prime minister. Nehru wondered why the three service chiefs had “ganged up” against the defence minister. Katari agreed with Nehru that Menon had his good qualities and had contributed to the nation, but then asked, “Why as defence minister, sir?” Katari felt relieved when Nehru laughed out.