If winter comes, can spring be far behind, was the hopeful message of poet Percy Bysshe Shelley. Philosopher Albert Camus found hope in autumn as well. “Autumn is a second spring,” said Camus, “when every leaf is a flower.” The Indian economy has been through a longish summer of discontent and the consequences are still around. But, with the Central government now focused on the economy, there is hope of a colourful autumn. Winter is anyway a brief event in most of India.

The results of the elections to the Maharashtra and Haryana assemblies showed once again that while the electorate reposes faith in Prime Minister Narendra Modi’s handling of national security, it remains less convinced about his handling of the economy. Interestingly, while Modi still benefits from a positive vote at the national level, the negative vote hurts the BJP at the state level. Development is, after all, a local phenomenon. 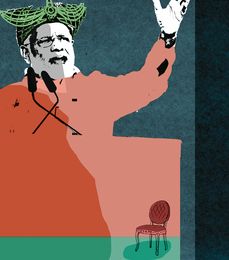 Who cares about national gross domestic product, annual rates of growth, and the fiscal and current account deficits. The economy is about one’s employment, education, local infrastructure and development around where one lives. While Delhi may manage foreign policy and national security well, the political consequences of its mishandling of the economy are felt at the state level.

While Modi and Amit Shah have understood how to articulate the language of hope for an aspirational India, they have not yet found a way of translating their mandate into better governance and speedier development, especially in states. The electorate trusts Modi and has given him a long rope. He will have to do more on the domestic development front to retain that trust. To begin with, it is necessary that Modi convinces every chief minister of the importance of the development agenda; he should take state governments along with him in seeking a higher rate of economic growth and improved governance.

There was a time when a few chief ministers came to symbolise development and became national, indeed international, icons for a ‘new India’. Certainly, Modi was one such, as chief minister of Gujarat. There were others like Chandrababu Naidu, at the turn of the century, and Y.S. Rajasekhara Reddy after him. In his early years in office Bihar’s Nitish Kumar was also a symbol of good governance and development. During the years of above average growth, between 2002 and 2012, the combination of Atal Bihari Vajpayee and Manmohan Singh at the Centre, and a clutch of active and competent chief ministers in various states came to define the ‘spring’ in India’s growth story.

After 2012, the story entered its hot and humid summer phase. While Modi’s victory in 2014 appeared like the good monsoon many were waiting for, his record on development has remained patchy. It was not just Modi who received the electorate’s hearty endorsement at the Centre but many chief ministers did so in states. Yet, there is no chief minister today who has come to symbolise development and the agenda of growth. Every one of them remains a populist of one kind or another.

If the Indian economy has to return to the 8.0 per cent plus trajectory of growth, the prime minister and the chief ministers must work together to keep the national focus on economic growth, new investment, employment generation and increasing the purchasing power of the poor and middle classes. Modi must inspire chief ministers into better performance and ensure they focus on development. Perhaps a meeting of the National Development Council ought to be convened this winter with a view to take the economy into a new spring.